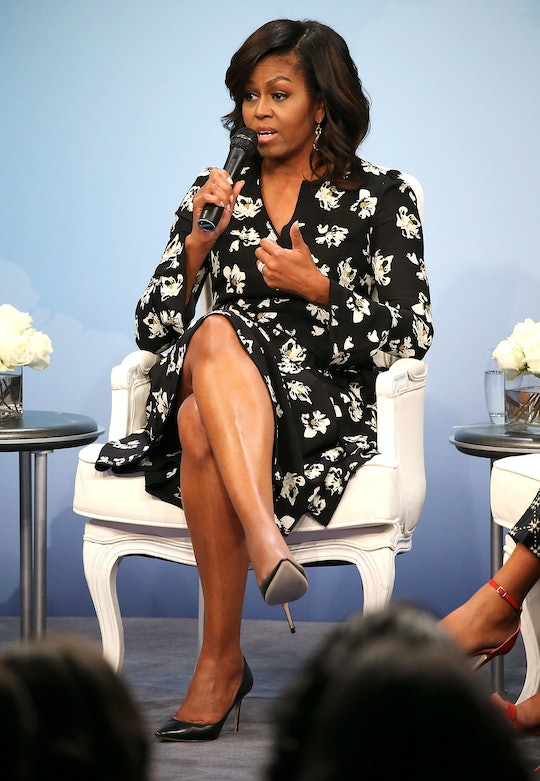 Michelle Obama stopped in Manchester, New Hampshire on Thursday to campaign for Hillary Clinton. But instead of discussing Clinton's policies, Obama couldn't ignore the elephant in the room: Republican candidate Donald Trump's lewd comments about women. Obama made a passionate speech criticizing Trump for his disrespect towards women. Here are some quotes from Michelle Obama's speech in Manchester that everyone needs to read.

Obama demonstrated how significant Trump's comments about women are by stating that "the measure of any society is how it treats its women and girls." She talked about having the pleasure of meeting and talking with young women at the White House celebrating the International Day of the Girl and Let Girls Learn. Yet amid these celebrations of empowerment for young women, a leaked recording of Trump's lewd comments about women have dominated the news.

"This has been a week of profound contrast," Mrs. Obama told the audience in Manchester.

Mrs. Obama spoke with so much emotion, her voice often shook during her speech. She stressed why everyone across the nation — not just women — has a right to be upset by Trump's treatment of women, and expressed her worries about what kind of role model he was setting for children. And she did all of this without mentioning Trump's name once. Here are her most memorable quotes:

1. "We have a candidate for president of the United States who over the course of his lifetime and the course of this campaign has said things about women that are so shocking, so demeaning I simply will not repeat anything here today."

2. "I can't stop thinking about this. It has shaken me to my core in a way that I couldn't have predicted."

3. "This is not something that we can ignore. It's not something we can sweep under the rock. This was not just lewd conversation. This wasn't just locker room banter. This was a powerful individual speaking proudly and openly about sexually predatory behavior, and actually bragging about kissing and groping women."

4. "And so many have worked for so many years to work to end this kind of violence and abuse and disrespect and here we are in 2016 and we're hearing these exact same things on the campaign trail we are drowning in it."

5. "Someone recently told me a story about their 6-year-old son who one day was watching the news and the little boy said out of the blue 'I think Hillary Clinton will be president.' And his mom said, 'Well why do you say that?' And this little six year old said 'Because the other guy called someone a piggy. You cannot be president if you call someone a piggy.' So even a six year old knows better."

7. "The men in my life do not talk about women like this, and I know that my family is not unusual. And to dismiss this as everyday locker room talk is an insult to decent men everywhere."

8. "There is so much at stake in this election. The choice you make Nov. 8 could determine whether we have a president who treats people with respect or not."

9. "We deserve a president who can bring us together and bring out the very best in us. Hillary Clinton will be that president."

You can watch Mrs. Obama's amazing speech in full here.