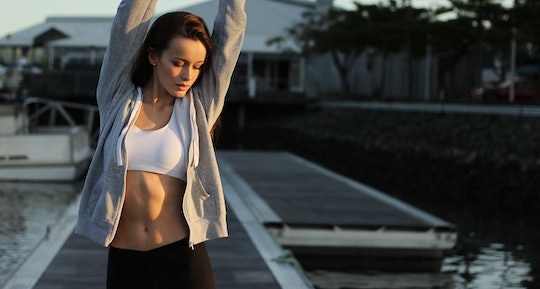 I like to tell people that I never make New Year's resolutions. My reasoning, which I think is totally legit, is this: If whatever you're planning to do were actually important to you, if you were truly resolved to make a change, you wouldn't wait until an arbitrary date to start. You'd hop on it right away. That said, every year for, like, the past three or so years, I've begun keeping a food diary to make sure I'm eating healthfully and in moderation and, yes, I want to lose some weight. "BUT NOT BECAUSE IT'S A NEW YEAR!" I insist to myself. And my brain is just rolling her eyes, shaking her head and chuckling saying, "OK, sweetie. Whatever you say." (Ugh, my brain is so condescending sometimes.)

There's something about the idea of a collective fresh start that appeals to us, I suppose. Some part of our communal psyche that says, "We can't break our old habits yet, because we're all still in this same year together and we've established a certain set of expectations for ourselves and each other. We can change on January 1." And then, of course, we don't follow through with our resolutions, which brings me back to the reason I refuse to (officially) make one in the first place (which, reminder, I pretty much unofficially do anyway, while simultaneously preaching about how ridiculous they are; my brain is also so hypocritical sometimes).

Resolutions are often derailed when life gets in the way of routine. And is there a finer example of life getting in the way of routine than of being a new parent? The first new year after you have a new baby can easily leave you overwhelmed with the idea of resolutions, because there's so much that needs to get back on track, perfected, finished, or even started after you welcome your little black hole of time and energy into the world.

To wit, here are some New Year's resolutions for new moms, all of which could've easily been applied to me right after having either of my kids: