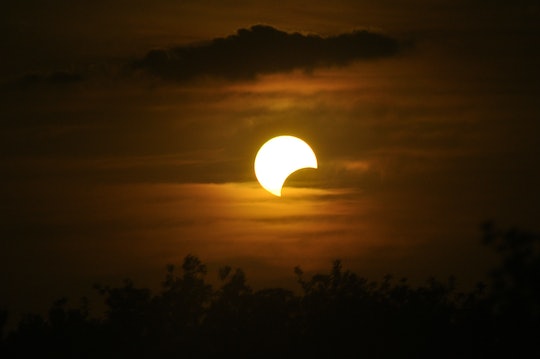 9 Old Wives' Tales About Being Pregnant During The Solar Eclipse

There are many milestones that inspire a number of superstitious beliefs: pregnancy and celestial events being two of the bigger ones. And when these events occur at the same time, the resulting superstitions are fascinating, if sometimes baffling. The old wives' tales about being pregnant during the solar eclipse will pique anyone's interest, especially those who are expecting at the moment.

If it's been a hot minute since science class, here's a refresher on solar eclipses. According to NASA, a solar eclipse occurs when the moon moves in between the sun and earth, momentarily blocking out the sun's light, and this causes a solar eclipse. Under certain conditions, this shadow can make a part of the earth as dark as night for a few minutes, even in the middle of the afternoon. Solar eclipses happen about every 18 months, and the next eclipse is set to take place Aug. 21, 2017, according to Space.com. If the internet buzz is any indication, plenty of people are thrilled to witness this space event.

Although modern people know about the orbit of the moon and shadows, imagine what eclipses looked like to people even a few hundred years ago. It's easy to guess the sudden daytime darkening of the sun freaked them the hell out. Plenty of superstitions understandably arose from the event, and many of those concerned the most vulnerable members of a society, such as developing infants. In fact, the Aztecs believed a pregnant lady who witnessed an eclipse would birth a child with a cleft palate, according to Baby Center. The beliefs about eclipses and their effects on pregnancy spanned the globe, and some are still in practice today. Here are a few old wives' tales about pregnancy and solar eclipses that'll blow your mind.