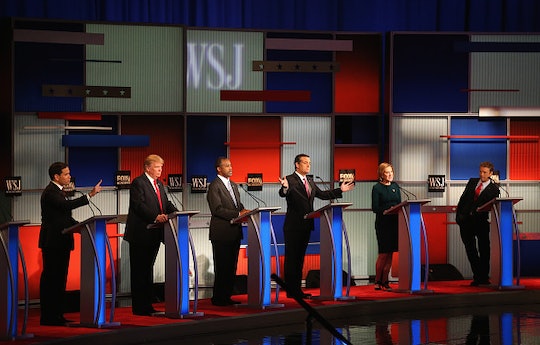 Look, you guys! Another debate between a slew of candidates we mostly won't remember in a few months! The fourth GOP presidential primary debate Tuesday night took place in Milwaukee and focused on the economy. Yes, all your favorite candidates were there... and by "favorites" I mean "the candidates your Conservative family members and former classmates post about adoringly on Facebook and make you thank goodness you're only connected to these people anymore by Facebook." If you're a glutton for punishment, tonight's debate was a veritable cornucopia of frustration. But you knew that already, didn't you?

The topic of this debate was important to feminists because economic issues are feminist issues. It's not like we're only allowed to be interested in discussions on abortion access, pay gaps, and Shonda Rhimes. Not to mention that if it ain't intersectional, it ain't feminism, so issues pertaining to immigration, LGBT rights, foreign policy that will affect millions of women, girls, and families around the world (all of which came up in some way, shape, or form) are feminist issues. So how did the Grand Old Party do on the feminist front? Well, their answers (and non-answers) have really just led me to ask more questions. Here are a few of my most burning: