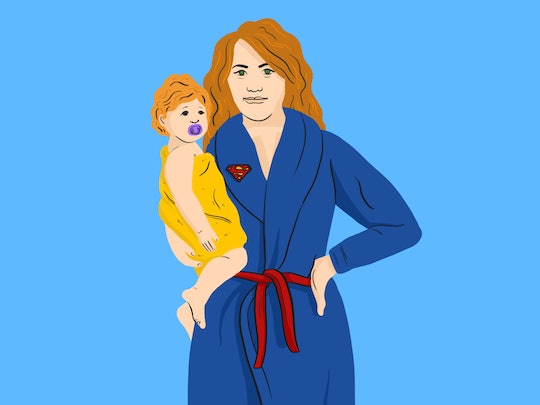 Hello, my name is Jamie and I am a feminist stay-at-home mom. I know: I'm so brave and trailblazing to come forward with this seemingly impossible declaration but... Wait. What? There are bajillions of us? And we're loud and proud about it? And most people are totally chill and realize that being domestic and being a feminist are not mutually exclusive? Oh. Well, now I feel like a jackass. Oh wait, what's that? A few people are still labored under the impression that being a SAHM contradicts feminist ideals? OK, cool, I can go ahead with my spiel then. (Which is good, because I have this whole article prepared.)

Let's clear this up right away: I would never argue that being a SAHM is inherently feminist. But neither are most other things, right? And like most other things, a confluence of intention, choice, and context can make it either feminist or in no way antithetical to feminism. Like a bikini! A bikini isn't inherently feminist either, and in some situations can be used in decidedly un-feminist ways (it's called the male gaze, and it's the worst), but if someone decides to, for example, put on a bikini to proudly display her body despite societal or personal pressure to cover up: bikinis for feminism, y'all!

Being a SAHM is kind of like that. Pressure to take on that role has been used as a tool of female supression... but that's not all there is to it. Automatically believing that choosing to be a stay-at-home mother is antithetical to feminism relies on several axioms about men, women, the value of particular kinds of work, and the measure of value that were created and perpetuated by the very forces feminism fights against.