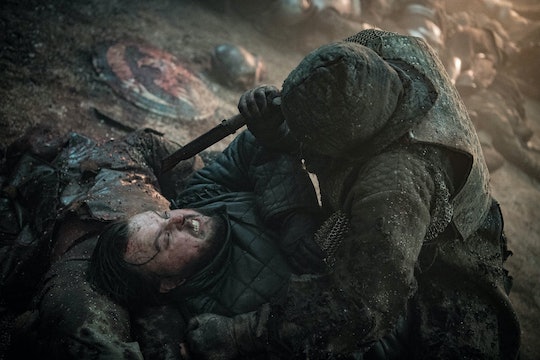 If The Battle Of Winterfell Were Real, We'd All Be Samwell Tarly

With the courage he mastered as a ranger of the Night’s Watch, Samwell Tarly went into The Battle of Winterfell fearlessly, but his fight eventually turned into sheer desperation. He got his buddy Edd killed, he fell, he cried, and was then ultimately abandoned by his BFF Jon. The Great War was not nice to the sweet maester-in-training, and these Samwell Tarly memes from Game of Thrones prove that everyone felt his pain.

I know he’s not the best fighter, but I had high hopes for Sam. He bravely fought off and killed a White Walker in Season 3 and he’s been proving himself on the courage front in the last few seasons — rebelling against his domineering father and the Citadel’s Archmaesters. So going into the Great War, I had a feeling he would find a way, perhaps a smart way, to hold his own.

But the White Walker army proved to be too much to handle, even for skilled fighters like Tormund, Brienne and Grey Worm. Everyone was struggling to stay alive from the get-go, but when the Night King raised the dead on the battlefield, the danger grew exponentially, leaving an untrained fighter like Sam with no chance of survival. If Arya hadn’t killed the Night King and wiped out his army, I doubt any human could have survived the battle.

But Sam, poor emotional and sweet Sam. He tried his best to fight, and killed plenty of wights along the way. At one point, while he was on the frontlines, he was pushed over by a wight, and just as he was about to get killed, his Night’s Watch buddy Edd saved the day. But unfortunately, that heroic action resulted in Edd becoming the first main casualty of the war.

Sam decision to fight for the living was an honorable one, but many fans think he would have been better off in the crypts with Gilly. He is a maester-in-training after all, and with the precious bits of information he carries — like the fact that Jon is really Aegon Targaryen — he should have kept himself safe.

But in the end, the battle proved to be too much, so Sam just fell on top of a pile of bodies and kept stabbing whatever he could. As he fought off the dead, the look on Sam’s face was more than just fear or sadness, it was a look of hopelessness, because he knew that the humans were losing. Seeing his desperation broke people’s hearts:

The heaviest moment for Sam during the battle was when he was laying on that pile of bodies, crying and stabbing all around him. He locks eyes with Jon, who is on a mission to kill the Night King and save Bran, but Jon doesn’t stop to save him. I understand the weight of the decision Jon had to make — save his friend or save the world — but many fans think he was being just a little shady.

Luckily, with all said and done, Samwell survived the Battle of Winterfell. No matter how hard it was to watch him struggle, at least fans didn’t have to see him die. Now that Game of Thrones is coming to an end, I really hope Sam gets the happy ending he deserves.