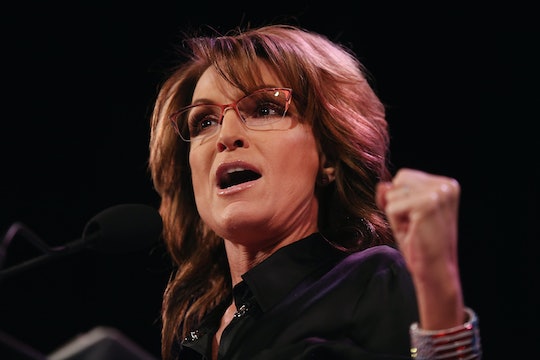 9 Sarah Palin Quotes To Remind You Where Her Priorities Lie

Just when you thought you might've seen the last of her, the gun-toting, Tea Party-promoting, marriage equality-opposing former governor of Alaska may have found her way back to the center of national politics. This time around, she's hoping to join President-elect Donald Trump's team, bringing her eclectic voice all the way to the White House. If you've somehow forgotten since 2008, Sarah Palin quotes are enigmatic, blunt, and can be quite entertaining to hear. Some of her most colorful quotes are below — ones that truly run the gamut.

Though Trump's team has yet to comment on Palin's potential role in the administration, it's been reported that Palin wants to be the head of Veterans Affairs. A Facebook post written by Palin confirmed her interest in the position. A loyal Trump supporter, Palin stumped for Trump starting in the spring of his presidential campaign, giving nationwide speeches that, as you might expect, have plenty of priceless soundbites of their own."We should be grateful we'll soon have a commander-in-chief who will champion our vets and honor the promises our nation made [and] ... who promised to drain the swamp and clean up all government corruption... all things our vets and active duty troops deserve," Palin wrote on Facebook.

Buckle up, because you might be hearing from Palin a lot more in the next four years than you have in the past eight. Here's a little refresher on what to look forward to: