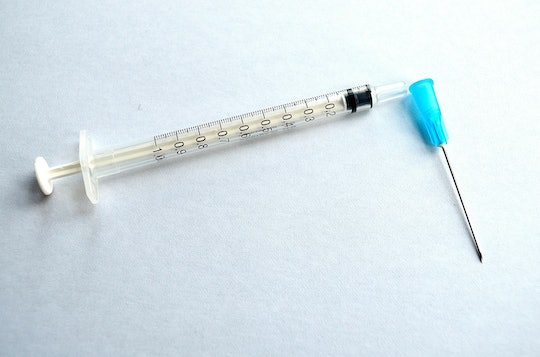 9 Scientific Studies That Disprove The "Vaccines Cause Autism" Myth

I could blame Jenny McCarthy, but it's a much bigger problem than just her false claims. The idea that vaccines are somehow behind the rise in rates of autism has gained so much traction that long-ago diseases that modern medicine had completely wiped out are making a comeback thanks to parents who think not vaccinating their kids will protect them from autism. But here are nine scientific studies that disprove vaccines cause autism.

The concern is kind of understandable, and for anyone willing to do a quickie Google search, there are more than enough claims of links between vaccines and autism to reinforce just about any position parents want to take. But if you look at actual, hard, scientific evidence, it's pretty clear that there is no link between vaccines and autism. In fact, there's even questions about whether the accepted spike in rates of diagnosed autism in kids is legit. According to a report from Science Magazine, it's really the diagnosis of autism that's on the rise. Researchers acknowledge that diagnoses of autism by educators have tripled between 2000 and 2010, but point out that there's also been a corresponding drop in the number of kids diagnosed with "intellectual disability."

Still not convinced? Well here are nine scientific studies that found no link between autism and vaccines.

Researchers say this study not only proves "no association between MMR vaccine (or thimerosal) and autistic disorders," but goes even further to add that, "The origins of this controversy incorporate unethical conduct and misleading research."

3. Autism Occurrence by MMR Vaccine Status Among US Children With Older Siblings With and Without Austism

The study published in the Journal of the American Medical Association found "receipt of the MMR vaccine was not associated with an increased risk of ASD (autism spectrum disorder)."

4. Lack of Association Between Measles Virus Vaccine and Autism with Enteropathy: A Case-Control Study

This study reported "strong evidence against association of autism with persistent MV RNA in the GI tract or MMR exposure."

5. No Evidence for a New Variant of Measles-Mumps-Rubella-Induced Autism

This study's report says its results "add to the recent accumulation of large-scale epidemiologic studies that all failed to support an association between MMR and autism at population level."

6. No effect of MMR withdrawl on the incidence of austism: a total population study

This study found "that MMR vaccination is most unlikely to be a main cause of ASD."

The conclusion of this study is short and sweet, "No association between measles vaccination and ASD was shown."

This study concludes "The body of existing data, inlcuding the ecologic data presented herein, is not consistent with the hypothesis that increased exposure to Thimerosal-containing vaccines is responsible for the apparent increase in the rates of autism in young children being observed worldwide."

9. Thimerosal exposure in infants and developmental disorders: a retrospective cohort study in the United Kingdom does not support a causal association

Researchers in this study said "...there was no evidence that thimerosal exposure via DTP/DT vaccines causes neurodevelopmental disorders."

Clearly, there is an abundance of evidence that clearly shows why parents should not be worried about vaccines causing autism in their children.