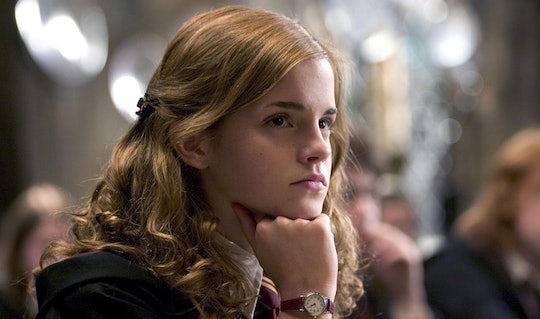 9 Signs Your Daughter Is A Mini Hermione Granger

If I could choose any Harry Potter character for my child to emulate it would most definitely be Hermione Granger. Sure, Harry is "The Chosen One" and "Weasley Is Our King," but no one worked harder and matured more in their seven years at Hogwarts than Hermione. She is an inspiration to all kids, but to young girls in particular who have been led to believe that the heroes of this world are almost always male. And in watch the Harry Potter movies or read the Harry Potter books, you may be on the look out for signs your daughter is a Hermione Granger in the making.

Hermione was somewhat of a late bloomer, as are many hyper-intelligent kids. In her first years at Hogwarts, she gets a bad rap for being a know-it-all. Her dedication and exuberance for schoolwork and perfectionism was often belittled by her classmates and sometimes by her friends. But, eventually, the knowledge and study skills she acquired helped them out of more than one pickle. Eventually, Hermione grew to be the smart, brave, strong, and beautiful heroine that has been an inspiration to so many young readers.

Here are some ways that your little girl might just be a Hermione Granger in the making.