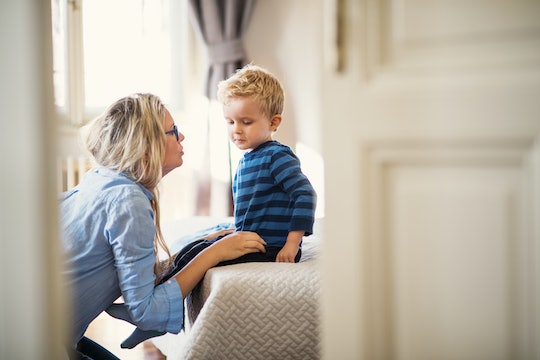 I was 5 when I heard an adult talk about sex for the first time. It was Mrs. DeWitt, Chrissy's mom in the 1995 film Now and Then, who was willing to discuss sex with her daughter because even though she thought she was too young, her friends were "trash mouths." And since sex is one of the so-called taboo topics in America to discuss with your kids, Chrissy's mom described it as a man using "his watering can" to "sprinkle water on the flower" that a woman grows when she makes a baby with her husband. As a kid, I was completely confused.

Now that I'm a parent, I realize why Chrissy's mom chose this non-scientific, entirely inaccurate, potentially harmful, and certainly confusing explanation. After all, many parents avoid discussing certain topics with their children because they consider them too taboo or think their kids are too young to learn about them. But kids should feel safe and comfortable talking to their parents about complicated subject matter, and they should feel safe asking questions and learning something new in a welcoming and supportive environment.

Even though Chrissy's mom approached the topic of sex in a ridiculous and ineffective way, at least she still tried. According to a 2017 American Family Survey report, only 25% of parents discuss issues related to sex, religion, and politics with their children. Before we send our kids out into the world, we should talk to them about these important issues. At the very least, we should provide them with developmentally-appropriate resources to help them learn about topics that will influence how they view themselves and others. While there are so many examples of important conversations to have with your kids, here are nine taboo topics to explore with your kids so that their (potentially harmful) assumptions don't go unnoticed and unaddressed: