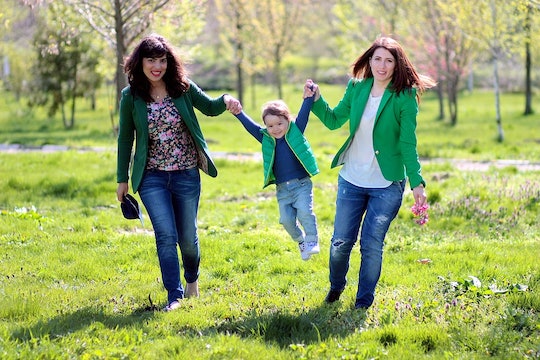 Can I tell you a little secret? Here it is: having children didn't change me at all. I mean, yes, having children drastically changed my life, mostly when it came to having money and going to social events (less of both, friends, far less of both), but popping out kids didn't reconfigure the fibers of my soul. The people who find this hardest to believe, it turns out, is the men in my life. I love them all, but some of their reactions have inspired me to reiterate, with passion, the things men need to stop saying about moms.

I don't have a solid working theory on why, in my personal experience, men are more apt to believe in the transformative power of motherhood or the idea that motherhood is, in and of itself, a universal state of being. Of course, given the centuries of societies around the globe conflating "womanhood" and "motherhood" (not to say the two can't be linked, but the idea that they're inevitably linked is ridiculous), I can't really blame them for coming to these crazy conclusions. However, I can call them out on it. Just because a particular message has been regurgitated so often that it become internalized, even subconsciously, doesn't mean that you can't look inward and reverse a fictitious and, honestly, hurtful way of thinking.

Yes, of course, #notallmen. I, mean, I get it and if I'm being fair, I must say that some women do this, too. However, today I just want to address the lads out there who've had a little too much of the Patriarchy Kool Aid.