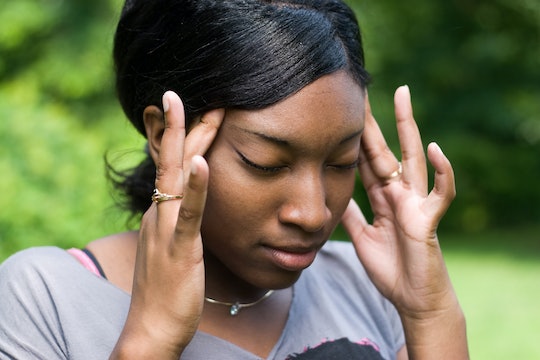 Having a panic attack (especially as a mom) is debilitating in every sense of the world. From the outside, it may appear as though the person having one is being dramatic about something that's "not a big deal," but when you're the one going through it there's nothing "dramatic" about it. It's a very big deal. Still there things moms who have panic attacks won't tell you because we're afraid you won't understand, or worse, you'll judge us for having no control over our actions when restrained by the panic attack's barrier.

More Like This
Vaccinated People Can Ditch Masks. Where Does That Leave Kids?
Your Guide To Swimming Postpartum
9 Things Not To Say To A Pregnant Woman On Mother’s Day
Moms To Toddlers Everywhere: This Aggression Will Not Stand, Man

I've been experiencing panic attacks since a young child. These attacks can come out of nowhere, and are described by the Mayo Clinic as "a sudden episode of intense fear that triggers severe physical reactions when there is no real danger or apparent cause." I've had them at holiday parties in a room full of people I knew, at a restaurant near a stranger, and even in my living room with no one around me at all. I never know when something will trigger these intense feelings, how I'll react, or how long the episode will last. Panic disorders are complicated that way. I'm prisoner to my panic and honestly, it's the worst. Not only is it extremely difficult to explain to those around me when it happens, but even I don't always understand the deeply-rooted fears that spring up out of nowhere.

Being a mom who endures these attacks means having to explain them to my children, too. Because I've been through the gamut, I recognize the signs in others. My daughter also deals with panic attacks which, as a parent, is far worse to watch than to deal with yourself. It's something I only noticed for the first time on a vacation a couple years ago, when a family member ushered her into the middle of a dancing crowd at an outside mall. Normally, my extroverted girl would be excited about a situation involving music, dancing, and other smiling kids. Instead, something happened. I noticed the signs of a panic attack immediately as she had a sudden wash of fear on her face. Her breathing quickened and her eyes darted all around. She refused to join all those care-free kids and, instead, clung to my side until she calmed.

t's one thing to experience panic on my own, but seeing it happen in front of me with my daughter was an out-of-body nightmare. I empathize so, so much and if you've ever been through it, you'll know how terrifying that must be for a (then) 8-year-old child. On that note, here are some things moms who have anxiety and panic attacks won't tell you, but I will, because while we're scared you'll judge or condemn us, we also hope maybe you'll be a little more compassionate the next time someone you know has one of these awful attacks.