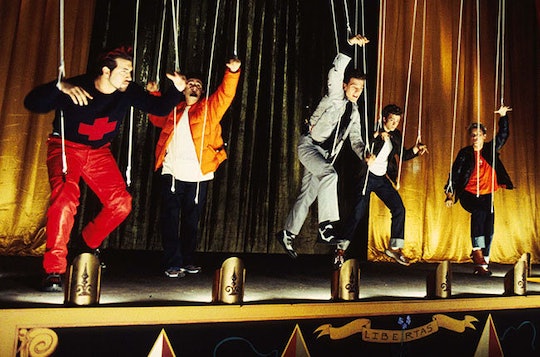 The ‘90s was a battle for supremacy among boy bands, girl bands, grunge, alt rock, ska, punk — the list goes on. The variety made for some great options for your Walkman disc player and for curating a library of mix CDs. For those who preferred pop, this led to some pretty fierce schoolyard discussions as to which ’90s boy band was the best — the one that not only made the best music but also clearly seemed to get you no matter what. Over a decade later, it has been decided which one won this debate, and clearly, that band was *NSYNC. Let me tell you why.

No, it’s not just because it contained Justin Timberlake (though I will admit — that’s a good enough reason on its own.) From their earliest self-titled record to the pure gold that was the No Strings Attached album to even the Celebrity era, *NSYNC routinely got what it was like to be a kid growing up in the '90s. Listening to their lyrics and watching their videos now is like getting transported in a time capsule you never want to leave, one that reminds you of all those feelings of young love wrapped in memories of cringeworthy middle school moments wrapped in another layer of nostalgia for those days. And if you got to see them in concert at the time (and let it be known I am eternally jealous of you for this), you understood the pure magic that was Joey, JT, JC, Lance, and Chris harmonizing on stage, letting you know that they felt those feels and saw right through to your heart (while you were, at the same time, tearin' it up of course). Still don't believe that *NSYNC got you more than any other '90s boy band? See proof below.