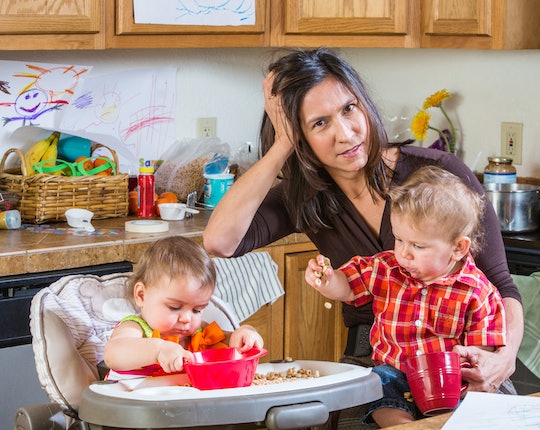 Being A New Mom Just Feels Like Too Much

When I brought my newborn daughter home from the hospital, I felt so lost and lonely. With excitement and fear all mixed together, I calculated every last breath I took so not to make a mistake and fracture her attachment process in the ways, I believe, were fractured between my mother and I. I wanted to be a good mother — the best mother — but didn't know what that meant. There were too many times when being a new mom just felt like too much of everything. Too much wakefulness. Too much dedicated attention and focus. Too much of me that my daughter wanted and needed all for herself. Only, at times, I didn't have anything left of me to spare because she'd already taken it all.

My thoughts on motherhood aren't traditional, or easily condensed into one essay because even as a grown woman, I've struggled to digest the relationship I had with my own mother growing up. It was turbulent, much like all her relationships, and I often endured the sour parts of her. A divorced, working mother who went back to school meant little time to work on, or develop, the bond that was lacking for so long. My grandmother stepped in most of my life to care for me. She was my greatest ally and champion and the reason I'm everything I am today. She, for the most part, was my mother for so much of my life that, when I brought home my baby, I overexerted my efforts so not to repeat history somehow.

My partner reassured me, often, the many differences between my childhood and our daughter's, but I failed to agree because it always boiled down to that fractured bond. Months into being a new mom, my postpartum depression (PPD) forced me to re-evaluate my life. I'd become listless, empty, and at a time, suicidal. The bond I'd hoped to mend between my baby and I was ruined, and it felt like it was because of me.

By the time medicines and therapies began making any progress, it almost felt like I'd have to be superwoman to make up for lost time. I'd always been with my daughter physically, but I'd been mentally checked out for so long the only way to fix things (I thought) was to be her everything, all the time and no matter what. Just typing that is taxing. Imagine how quickly I overwhelmed myself once my partner returned to work. Motherhood is really hard. Now that I am one, I have far more compassion towards my own mother and all she must've gone through, too. Maybe she endured too much wakefulness. Maybe I needed too much dedicated attention and focus. Maybe I demanded too much of her. Maybe, at times, she didn't have anything left to spare because I'd already taken it all.

Sometimes, being a new mom is too much. There's no way around it. No matter what you promise, you'll inevitably have to compromise something. Here are some times my new baby and all the responsibilities were a little too much for me. because let's be honest, sometimes it just, is.