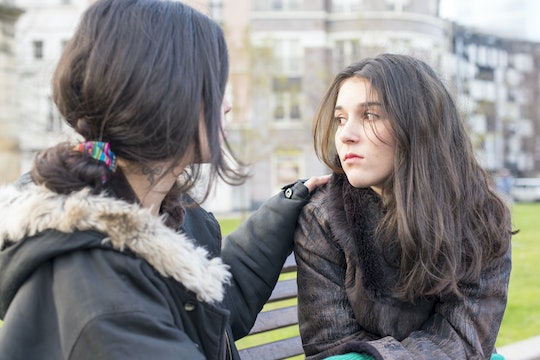 9 Things To Remember When You Lose A Pregnancy

My first miscarriage happened just before my daughter turned 3. Her birthday party was planned and, because my husband and I had been trying for six months to get pregnant, it was an exciting time. So the loss was unexpected and turned our world (temporarily) upside down. At the time, I was really hard on myself, clouded by grief, confusion, and questions about what went wrong. I wish I'd had someone tell me some of the undeniable truths every woman should remember after a pregnancy loss because, maybe then, I'd have forgiven myself.

By the time my doctor confirmed the loss, I couldn't focus on my daughter's party. Like, at all. Instead, all I could think about was the steps I'd have to take that would at least get me out of that doctor's office, and how to absorb this new reality, all while I sobbed uncontrollably. The procedure to remove the fetus was scheduled for the next day so, in theory, I could move forward as quickly as possible. If only it were that easy. I had to have my mom drive me home and my daughter's birthday, although important, seemed so insignificant at a time I was in such despair.

I'll always wonder what could've been, but at the same time, had those events not occurred, I wouldn't have my amazing rainbow baby now. Still, and regardless of how the loss transpired or the events that followed, it was hard and life-changing. I've learned a lot since I heard the unthinkable, and those lesson reminded me of things women who've lost need to hear — these important, undeniable truths I want you to hear. Let them soak in and, eventually, believe them, because some day you'll look back on your pregnancy loss (or losses) and understand that it's not your fault. Here are some other things I want you to hear:

More Like This
New Report Shows 80% Of Pregnancy-Related Deaths Are Preventable
How To Increase Your Sex Drive While Pregnant
Are Boy Babies Usually Late? Signs Your Baby May Be Born Late
Are You Leaking Amniotic Fluid Or Is It Normal Discharge? Experts Explain