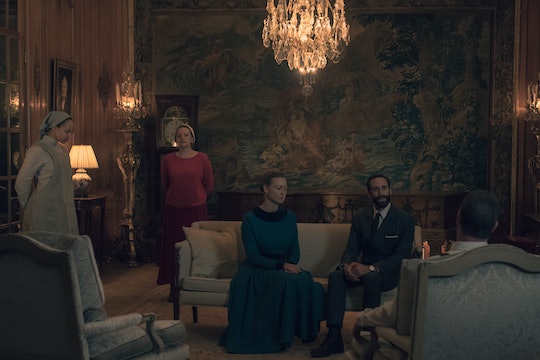 Commander Winslow Is Heating Things Up On 'The Handmaid's Tale'

If you’re an old school Law & Order SVU fan like me, you were probably thrilled to see Christopher Meloni join the cast of The Handmaid’s Tale as Commander George Winslow. His character was introduced as a Gilead commander who hosts June and the Waterfords when they visit Washington D.C.. He seems like a powerful man, and these Twitter theories about Winslow on The Handmaid’s Tale could explain what role he’ll have going forward.

In case you missed it, in Season 3 Episode 6, titled “Household,” Serena (Yvonne Strahovski) and Fred (Joseph Fiennes) take June (Elisabeth Moss) to Washington D.C. where they plan to negotiate Nichole’s return from Canada through a neutral Swedish envoy and a series of propaganda videos. While in D.C., the Waterfords stay with Commander Winslow, his wife, Olivia (Elizabeth Reaser), and their six kids. When Fred and Serena thank him for letting them stay there, he tells them to thank his wife, because she was the one who invited them.

Later, when the two commanders are alone playing pool, Winslow tells Fred that he admires his presentation of power, calling his ideas to create the propaganda videos ”a stroke of genius.” There seems to be a sense of sexual tension in the air, as Winslow tells Fred about potentially giving him a new post in D.C.. “We’ll just let this ordeal play out,” he says as he assertively cups Fred’s shoulder. “A man of your talents could be an asset.”

Fans were quick to notice the chemistry between the two commanders, and they took to Twitter to theorize where their relationship might go.

Others speculated that Fred would do whatever it takes to get ahead professionally, even if that means getting into a relationship with Winslow.

In an interview with ET, Meloni talked about the billiards scene, but didn’t reveal whether or not Winslow’s moves were sexual in nature. “I thought of it as a nice touch,” he said. “Everyone has their own interpretation of it… It’s what your brain tells you it was — I intentionally positioned myself in such a way and engaged Joseph in such a way -- it was all intentional.” When asked about the scene win in which he positions his rear in Fred’s face, Meloni said that when filming, he “thought of them as animals, you know, literally dogs sniffing each other’s a**es [to find out] who’s alpha.”

Some couldn’t help but notice the irony of Fred being objectified:

When talking to Good Housekeeping, The Handmaid’s Tale executive producer Warren Littlefield hinted that there may be some kind of relationship brewing. “There’s a respect, there’s an admiration, there’s a bonding,” he told the outlet. “Is there possibly some kind of attraction here? Commander Winslow is married with a large family, and that spins Serena Joy’s head, so it’s a wonderfully multi-layered relationship that Fred Waterford finds himself in, with a goal.”

But aside from the chemistry between Fred and Winslow, fans also paid close attention to the fact that Winslow fathered six children, which means he’s had many handmaids or stolen kids from their families.

As the season progresses, I’m sure fans will get to see more of Winslow and find out what his intentions are. So far, he seems to have major pull in Gilead, which means he could easily be the piece of the puzzle that sets June free.