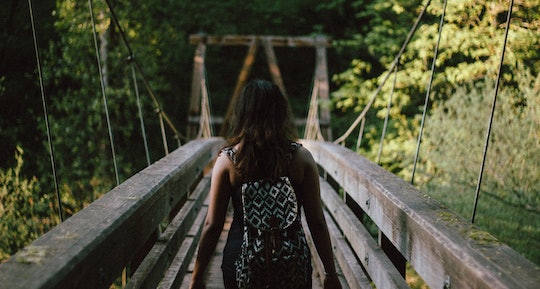 9 Ways Surviving An Abusive Childhood Makes You A Better Parent

I used to think that, for sure, surviving an abusive childhood would make me a bad parent. I feared that I would continue a cycle of anger, hatred, violence and hostility, as if it was cosmically written in my DNA and I was powerless to stop the inevitable. Then I had my son.

I have since learned that surviving an abusive childhood has actually made me a better parent. I had front row seats to the "What Not To Do" show, and as a result of having a parent who was the worst, I learned all the ways I could be the best parent for my son. I wouldn't necessarily thank my toxic parent for providing me with the experience, but I can't say that my abusive childhood didn't end up benefiting me as a mother, a partner, and a person.

Now, this isn't to say that people who grew up in non-abusive homes with loving parents and a stable environment are horrible parents. I'm not saying that people with abusive childhoods have a leg up on other parents, because they were punched instead of praised. I'm definitely not suggesting that an unhealthy environment is a necessity if we are to become the best parents we can be. Clearly, having parents who exemplify all the correct ways to love and nurture a child provide those children with awesome role models to pattern their own parenting after later in life. Parents can either be examples of what not to do, or what to definitely do (and it's usually a mix of both), and ideally, their kids will grow up and make an earnest effort to reject the negative, damaging behaviors that were patterned for them, while retaining the beneficial ones. That, in simplest terms, is how we improve our parenting from one generation to the next, even if it rarely works out that perfectly. It's the goal anyway.

So I'm not saying that having an abusive childhood is some magic ticket to being an amazing parent. (Unfortunately, for so many people, the opposite is true, although the long-term effects of childhood abuse as people grow up and have their own kids is complicated and evolving.) What I am saying is that even a painful history shapes our present. I'm saying that through resilient, inspiring, supportive friends, and an inner strength that can only be forged in the weakest and most hopeless of moments, people can turn a sad story into a happy and uplifting one.

I'm saying that there are plenty of people who can break a cycle and take what was an otherwise horrible example, and use it to shape their decisions and parenting choices for the positive. This is how that looks.