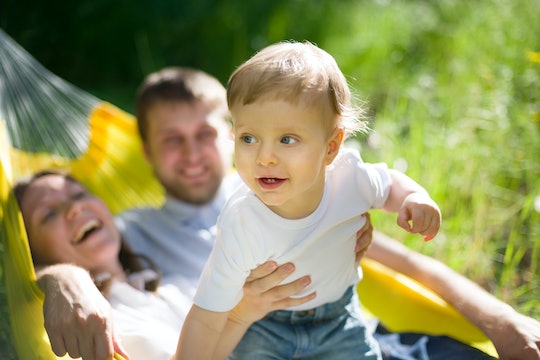 My partner and I have very different parenting techniques. He's the fun, outgoing one and I'm the strict, quiet one. He's the dawdler and I'm the one always on schedule. While he works long hours outside of the home, I'm here with the kids, working inside for the bulk of it. As a result, his reactionary time to squabbles is a bit shorter. It takes a little more to rattle me, because I've seen and heard it all. So while I don't mean to, I'm sure there are plenty of times I'm shaming my partner's parenting, arguably, in front of our kids at times. It's not because I don't respect him, but because I'm just so used to being the one in charge.

In the early days of our relationship, my partner and I hadn't intended on having a baby or getting married. I'd just come out of a lengthy relationship and we were two young kids, trying to find our paths. Then (because there's always a then), I got pregnant. Just like that, everything changed. We grew up quickly, figured out finances and responsibilities, then had our baby. A year later, we married — not because we had to but because we wanted to. Since then, we've had another baby, and although he's not perfect (neither am I), my partner is a fantastic father. Actually, I don't think I tell him enough.

Growing up with a father who didn't spend time playing with me (or really getting to know me at all), along with a biological father who'd not been allowed in my life, I sometimes lose sight of of my partner's greatness in simply being present. When he's invested with and in our children, I know there are times I undermine or un-do something he's said or done. This co-parenting thing only works if we respect one another's choices, right? With that, here are some ways you might be shaming your partner's parenting style. The best way to fix it is to first admit there's an issue. So, here I am. Admitting.