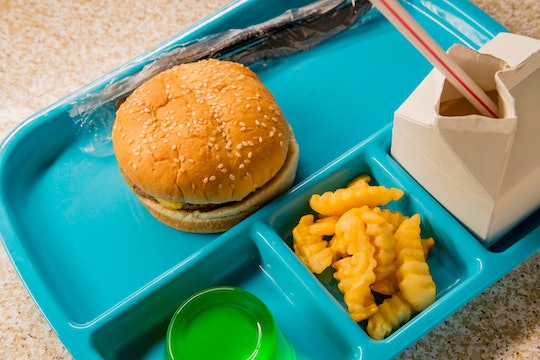 When lunchtime rolls around, many students can't wait to dig into their lunches, especially when one of their favorites is on the school cafeteria's menu. Couple this with a special event, like a birthday, and you have a winning combination. But this wasn't the case for this 9-year-old boy who was denied hot lunch on his birthday due to a lunch debt. And in response to the widespread outrage surrounding this decision, the boy's school — Green Primary School in Uniontown, Ohio — is changing its policy regarding school lunch debt.

Jefferson Sharpnack was looking forward to his birthday lunch of cheesy bread sticks, a special meal he had chosen for his big day on Aug. 30, according to CNN. But when the lunch lady saw that he had an outstanding balance of $9 on his account, she reportedly took it away and replaced it with a cold cheese sandwich from the fridge, according to CNN. The cheese sandwich is an alternative lunch that children with a lunch debt eat instead of the regular menu items for the day, in case you're wondering.

Although Sharpnack was given lunch, it wasn't the one he wanted. Not to mention, the birthday boy felt embarrassed to have his food taken away in front of his friends, as his grandmother and temporary guardian, Diane Bailey, told WEWS-TV. Still feeling upset when he got home, Sharpnack told Bailey that he had the "worst birthday ever!," according to TODAY.

Green Primary School and Green Local Schools did not immediately respond to Romper’s requests for comment regarding the lunch debt policy.

As for the debt, Bailey was aware of it but thought it had been taken care of since the boy and his siblings were in the process of enrolling in the school's free and reduced lunch program. Bailey was reportedly told that she would have to write the school a check to cover the unpaid balances until the paperwork was processed, according to People.

Either way, Sharpnack's story sparked so much outrage that the school issued a letter to all parents, explaining their lunch policies and letting them know all children will receive the same lunch regardless of debt going forward, according to ABC News.

"All students enrolled in Pre K through twelfth grades will receive the standard lunch for the day at their respective buildings regardless of their account balance," the school said in a statement, according to The Hill. "We are sensitive to the financial hardship families incur and challenges presented due to the cost of school breakfast and lunches. Our staff, in coordination with Family Support Specialists, will continue to work with families to ensure they have access to all available resources to assist with purchasing school meals."

Sadly, this is isn't the only instance of "lunch-shaming" in which children were denied regular lunches because of outstanding debts.In Pittsburgh, for instance, a cafeteria worker refused to stand by the school policy of denying hot lunch to anyone with a lunch debt, according to CBS News. She ended up quitting.

And in Cherry Hill, New Jersey, high school students with a lunch debt over $20 are given a tuna sandwich instead of the standard hot lunch, a sandwich that would serve as a symbol of the debt to their peers, according to NJ.com.

Lunch-shaming can lead to a variety of negative consequences, a reality numerous experts have touched on before. "It doesn't create a good psychosocial environment for the children at all," Dr. Collette Poole-Boykin, a child psychiatrist fellow with the Yale Child Study Center said, according to ABC News.

Clearly, America has a problem regarding school lunches and lunch-shaming. It's unfortunate Sharpnack got caught up in this ongoing issue, and here's to hoping his birthday got a little better once school was over. Because shaming a child for things that are out of their control is unnecessary, a sentiment Sharpnack's school has thankfully since realized.