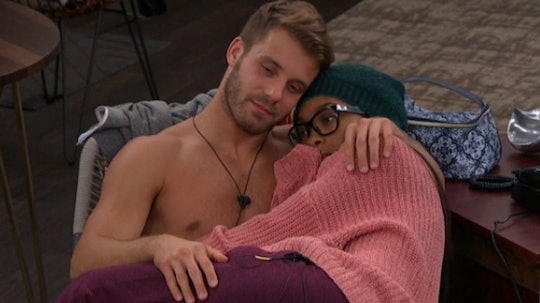 When it comes to Big Brother, showmances are one of the best parts of the show. Nicole Franzel, who returned to the show this season, was involved in one of the most popular Big Brother showmances with fellow houseguest, Hayden Moss, in Season 16 and fans are still rooting for them to get back together. For now it seems like this season's biggest showmance is between newbies Zakiyah and Paulie. From the very beginning these two have been close. They cuddle, have deep conversations, and even had a sleepover the first week (although nothing major happened). Zakiyah and Paulie's showmance on Big Brother 18 even has it's own ship name: Zaulie.

Although we haven't seen it on air yet, these two dominate the live feeds. Anytime they're together, you can be sure everyone's watching and within minutes there's videos of them on Twitter and YouTube. When it comes to Zaulie, they're not only cute and flirtatious with each other, they also have serious conversations, too. Could these two become even more than a showmance and take their relationship with them after the show? It's too soon to tell. For now here's just a few videos that prove these two are definitely meant to be together.