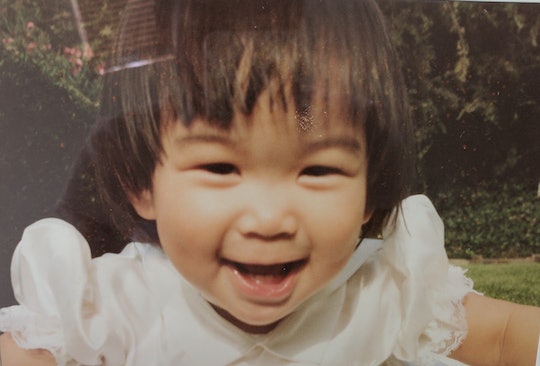 In just about every way possible, the '90s are making a huge comeback right now: Fashion (high-waisted jeans, flannel); TV (The X-Files, Roseanne), even beauty (pink hair and metallic eye shadow). But there's one area where the grunge era is decidedly not having a revival: Baby names. That's right, despite rampant rumors to the contrary, names like "Heather" and "Dylan" aren't due for any mass monogramming in the near future (even if they are pretty great). So why aren't those rad '90s baby names coming back anytime soon, especially with such a major metro moment happening?

"Overall, '90s names are among the least likely to be on the upswing today," Laura Wattenberg, creator of Baby Name Wiazard, tells Romper.

"They've just turned the generational corner, and are about to enter the realm of 'mom/dad names.' Parents today are focused on freshness in names, so the names of their own generation tend to be overlooked."

In fact, Wittenberg points out, some of the names that have fallen in popularity the most since the year 2000 include such '90s classics as Brandon, Tyler, Jessica and Ashley (you can see her full list here). Additionally, none of what Wittenberg calls the "defining names of the '90s" (think Zachary, Cody, Brittany, Kelsey) sync up with the defining names of the 2010s thus far (Harper, Ava, Mason, Jaxon, etc.). There simply isn't any data to back up the idea of a resurgence in names inspired by the decade that gave us Kurt Cobain, Clueless, and Zima.

And Wittenberg isn't the only expert to scoff at the idea of a '90s baby name revival, either.

"There is no way that names from the '90s are making a comeback in the U.S.," Pamela Redmond Satran, co-creator of Nameberry, tells Romper.

"Today's babies may get vintage names that were popular in their great-grandparents' era, 90 or 100 years ago, and they may get newly coined names, but they are not going to be named Jessica or Ashley or Christopher," she says.

That's not to say, of course, that there aren't a few perennial classics that show up in "most popular name" lists decade after decade. Ranked the fifth most popular boy name of the '90s according to the Social Security Administration, the biblically-themed Jacob was also the seventh most popular boy name of 2016. Emily, the third most popular girl name of the '90s, was back on the charts in 2016 at number nine, while William went from #18 in the '90s to #3 in 2016. (No official data for 2017 was available at the time of this writing.)

So if '90s names aren't all the rage right now, what are the monikers showing up on birth certificates everywhere this year? Nameberry's predictions for popular names in 2018 include "strong female names" inspired by both real and fictional heroines: Ruth for Ruth Bader Ginsburg, for example, or Arya for everybody's favorite badass on a mission from Game of Thrones.

Interestingly, according to Nameberry, in 2017 "top boys’ names were impacted much more by fashion shifts than girls’ names" (something that's basically never happened before in the history of names). Assuming that trend picks up steam this year, already stylish choices such as Atticus, Jasper, and Wyatt could get even more fashionable.

Maybe, when all is said and done, we're just not ready to live through the '90s again. There's a big difference between binge-watching Beverly Hills 90210 from time to time and naming your first-born Brenda, after all.