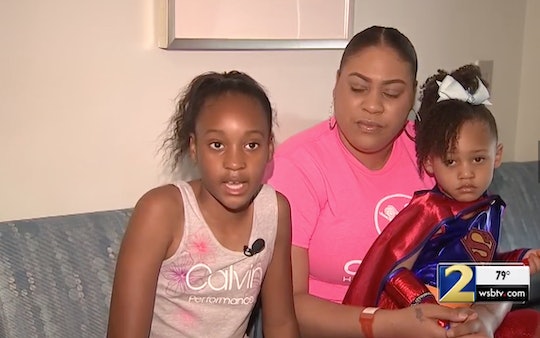 With summer right around the corner, parents are gearing up to enjoy the warmer weather in the water with kids. Pools, lakes, and oceans can be nice respites from the sun, but they can also be terrifying places — especially with little ones. One family learned that the hard way following a harrowing near-drowning experience caught entirely on camera. A 10-year-old hero saved her drowning sister, and her experience will leave you shaken.

Surveillance footage from the Chamblee apartment complex, obtained by WSB-TV, captured the exact moment Kali Dallis, 3, went underwater while swimming with her big sister. Jayla Dallis quickly realized her sister was drowning and sprang into action. She raced to her sister and hurried to get her out of the pool, the outlet said. Jayla told the outlet she grabbed her sister by her hair at first, and then her waist, to pull her from the water. Another witness called 911 while a family member and the apartment operations manager switched off performing CPR on the toddler. Chamblee police Sgt. Ed Lyons was the first to receive the call, and as the father of a 6-year-old girl himself, raced to the scene.

"I was sitting in the back of the police department in my patrol car, checking reports," he recalled. "I saw my little girl laying there. Same kind of little bathing suit she wears. Same little hair pulled up in a little bun up top. You know, you kind of have to push past that and do what you're trained to do."

Kali remained in critical condition after the incident, though she was showing signs of life, People reported, but remained in critical condition. She was taken to Scottish Rite Hospital, where her family stayed by her bedside. Doctors were initially unsure she'd survive, but now, nearly two weeks after the frightening incident, Kali is expected to make a full recovery. Her mother told WSB-TV it's nothing short of a "miracle," adding that parents shouldn't "take [their] eyes off" kids while they're swimming.

Kali's near-drowning is a reminder of the importance of swim lessons for young kids. As noted by Nicole Hughes, founder of Levi's Legacy — and organization started after the drowning death of Hughes' own 3-year-old, drowning is the number one cause of death for young kids. Hughes has made it her mission to urge parents to sign their kids up for survival swim lessons, which could save their life in situations such as the one the Dallis family recently experienced. In a recent Facebook post, Hughes stressed the importance of such lessons.

"Please enroll your toddler in the RIGHT swim lessons, once that focus on water competency and survival," she wrote. "'SURVIVAL' is the goal and the key word. If your child can 'swim' but only WITH a flotation device, that is not swimming. If your precious 3 year old somehow found his way to the deep end, could he survive?"

Hughes continued, "ALL SWIM LESSONS ARE NOT CREATED EQUALLY. Swimming is not in the same category as soccer and dance. Drowning is the #1 cause of death for ages 1-4; many in that age group cannot swim. These two factors have to be connected."

Following the death of her son, Hughes has teamed up with Goldfish Swim School to educate parents around the county about the importance of water safety for young kids. Together, they created a program called Goldfish RX, according to a press release. Goldfish RX aims to establish relationships with pediatricians by providing them with educational materials, including pamphlets and a "prescription tear pad to prescribe every child an introductory, complimentary swim lesson."

The thought of your child drowning is horrifying, but there are ways to ensure your child is better equipped to handle themselves in a water setting. Never taking your eyes off your children while in the water and signing them up for the right swim lessons are great places to start.