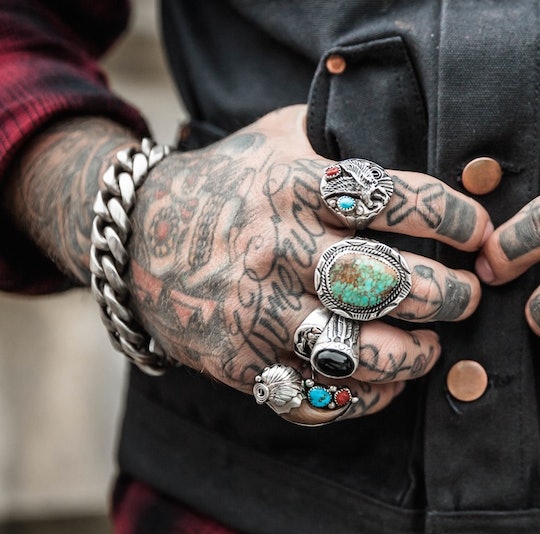 A 4-Year-Old Girl Tattooed A Strawberry On Her Dad (Yes, An Actual Tattoo) And He's Not The Only Parent Who Got Inked With Their Kids' Art — PHOTOS

Let's get a basic truth out of the way real quick here: parents with tattoos are cool. So cool, in fact, that some of that coolness usually passes down to their kids. You know the ones, they come with names like Hunter or Steel (yes, I know kids with those names, and yes, they're pretty cool). So it's no real shock that Florida tattoo artist Brad Bellomo, owner of the 3rd Eye Tattoo shop, decided to let his kid get into the tattoo game earlier than most. Well, like 15 years earlier than most, to be honest. But as a veteran tattoo artist himself, he was there to hold the tattoo gun steady and take her through the process carefully, resulting in a crazy-adorable strawberry tattoo. Yes, this 30-year-old tattooed man let his adorable 4-year-old ink an adorable strawberry on his arm. I'll pause while you swoon over the sweetness.

While little Chloe is most known around her dad's shop for drawing on ceiling tiles, her artwork is now a little more permanent. OK, a lot more permanent. And maybe this marks the stirrings of a future career to follow in her dad's footsteps? Regardless, that strawberry, with the curved lines and requisite green "top hat" is seriously impressive, especially when you cosinder that I, a grown-ass adult, wouldn't even be able to look at what I was doing if I had to be responsible for tatting someone up. (You know, because of the whole needle going in and out of someone's flesh thing.)

But as it's a long standing tradition to get your kids' art tattooed on you, this just takes another, decidedly more badass step forward. And you can definitely be sure that no one else will be walking around with that purple unicorn or two-headed dog on their ankle (except maybe your kid's other parent).

Let's take a look at this trend that is becoming an all-too-awesome alternative to Chinese symbols that we don't know the meaning of and ankle butterflies.

This guy's been having his kid's art tattooed on him since they were five, and it really is a dedicated tribute to his love of crooked lines and jagged edges.

This mom secretly had her kid's drawing tattooed on her, and she actually got pretty lucky with the skill level involved. I think I'd even get it inked on me and it's not even my child. Although, truth be told, apparently this Redditor's son eventually confessed that it was his friend's artwork, not his, which is really hilarious.

This is another one where I refuse to believe that the parent got this lucky to have their kid actually draw something cool and not terrifying, like some nightmare-fueled artwork kids are known for randomly creating. And this mom can even play it off as some sort of portrait of her, with her "name" written next to the balloon-wielding stick figure.

This guy took the whole kid's drawing idea and ran with it, permanently adding both of his children's artwork to his body. This is another one that sort of proves that the whole kids drawing tattoos idea is actually a great idea and never turns out wrong.

This dad apparently used his child's last drawing to create a tattoo in remembrance. I have no words. Hey, let's end this on that depressing note! Enjoy the cry, friends.

(Just kidding, I won't end things that way. Here's a gif of an ermine to cleanse your emotional palette.)

More Like This
From Captions To Gifts, These Are All The Kindergarten Graduation Ideas You Need
15 Beautiful Father’s Day Poems That Say It All
The Dads In Your Life Are Going To Love These Father’s Day Cards
Mom Gave Birth On The Side Of The Road... With Her Five Other Kids In The Car