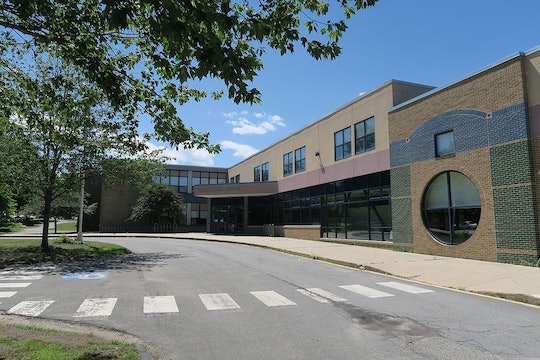 The policing of women's bodies starts before they're even women, but that's going to change if 11-year-old Molly Neuner has anything to say about it. The Maine sixth grader's protest against sexist dress code policies at her school quickly gained support from fellow students and garnered national media attention, and soon, the King Middle School in Portland may change its policy. District Superintendent Xavier Botana told The Boston Globe that the district is considering "smart adjustments" to the dress code, and according to the Portland Press Herald, Principal Caitlin LeClair will convene a review panel with parents and students, including Molly, to discuss a solution at the end of the year.

The dress code first became an issue last week when a teacher reportedly ordered Molly and another girl to stand in front of the class and measure their clothing. Molly was told to hold her fingers against the strap of her tank top to ensure that it was at least two fingers wide, while the other girl had to check that her shorts were at least "finger tip length." Beside the fact that fingers are not a legitimate unit of measurement (because humans come in different shapes and sizes), the school's policy doesn't even list those requirements.

Molly told the Press-Herald the situation was "really uncomfortable and weird." Later that day, the same teacher reportedly ordered Molly to cover up with a sweatshirt, and when she said she didn't have one, the teacher allegedly threatened her with detention if she violated dress code again. Molly told Portland's WCSH that two teachers explained that her clothing was a "distraction" to the boys. When Molly told her mother, Christina, what happened, Christina introduced her to the #iamnotadistraction hashtag, a social media movement calling out sexist dress codes. Two days later, Molly returned to school wearing another tank top, the hashtag written across her arm in block letters. About 20 more girls joined her protest.

The school's current policy prohibits "thin strapped, revealing tops (like tube tops, halter tops or low cut tops) on girls," but does not define "thin." It's unclear what a thin strap reveals that's so scandalous; neither sleeveless tops nor boat neck tops are banned. Moreover, girls should not be held responsible for the behavior of boys; if they're distracted, that's their problem. Another troubling aspect is that the two altercations with the teacher happened at snack time and recess. Sexualizing a child who's still young enough to play on a playground is incredibly disturbing. Luckily, Molly wasn't too young to know how to stand up for herself, and fight back when she knows that an adult is wrong.