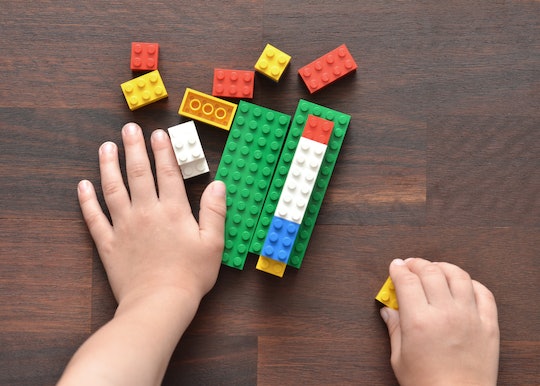 Little kids do lots of exasperating things that defy explanation, but putting small objects up their noses is definitely way up at the top of the list. Usually, when a kid gets a pea or a pebble up their nostril, their pediatrician can extract it without too much trouble. But sometimes, these offending objects go rogue. Case in point: A missing LEGO fell out of a 7-year-old boy's nose after two years in New Zealand. Two. Years.

As the New Zealand Herald reported, it all started in 2018 when Mudassir Anwar's 7-year-old son, Sameer, told his parents that he lost a piece of a LEGO up his nose. Naturally, his parents took him to the doctor, expecting the LEGO to be removed with those giant medical tweezers, probably. But here's where the story starts to get curious: The doctor couldn't find any LEGO in Sameer's nose. Perhaps, the physician said, the toy had entered Sameer's digestive system (in which case it would "pass" naturally).

It never "passed," but Sameer didn't complain of any discomfort in his nose after that, so the family forgot about it. Until, that is, Sameer took a sniff of a cupcake at a recent birthday party and felt a sudden pain.

Sameer told his parents he thought he inhaled cake crumbs.

"So his mother then helped him blow his nose, and then this thing came out that was missing for the last two years," Anwar told the NZ Herald.

A shock indeed. But how could the little boy not have noticed the LEGO in his nose for two years? Part of the reason could be the type of LEGO in question. Apparently, it was an arm from a character (not a block, which it seems would be much harder to ignore). As for Sameer, he knew exactly what he was doing, according to the NY Post.

“I did it by purpose,” the boy told local TV hosts, but he didn't think the LEGO would stay up there for quite so long. “I was frightened and surprised.”

No doubt, kid. No doubt.