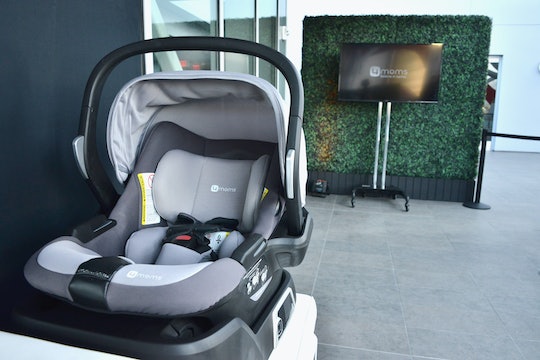 It’s been three years since Lisa Smith lost her daughter Mia and now she feels she has to speak out. The first-time mom lost her child when the baby died sleeping in a car seat, and now Smith is sharing her story to shine a light on a risk she sees happening everywhere.

Little Mia Smith was 17 months old when her home daycare provider put her down for a nap in her car seat. Soon after, Smith got a call at work that Mia wouldn’t wake up, according to Today. “This was our beautiful little girl. Perfectly healthy in every way,” Smith said on the show. Mia died from something called positional asphyxia (also called mechanical asphyxia), which is when a body posture doesn’t allow for proper breathing.

The danger of car seats is that they are made to be clicked into a base that puts them into a position that protects against these dangerous kinds of postures. “When a car seat is in the car, it’s reclined at 45 degrees, NBC News contributor Dr. Natalie Azar told Today . "This allows the baby’s head and neck to rest backwards so that it’s not slumped forward and blocking the airway.”

Sharon Evans, a trauma injury prevention coordinator for Cook Children’s Hospital told news station WFAA that there is nothing about a car seat's design that makes it a good sleep space. She warned against loose straps that let a child slump down, as well as positional asphyxia, and the ability for a baby to become tangled in the straps.

Smith told WFAA that now she warns parents whenever she sees the practice. "I walk around town and see people using a car seat on the seats at restaurants or putting them on the floor at tables. I literally walk up to people and I say, ‘You know, I had a daughter who was 17-and-a-half months who passed away and I just want you to be really careful." Smith knew of the risks herself and didn’t allow Mia to sleep in the car seat, which just makes the story all that much more tragic. Her daycare provider was a licensed childcare professional, according to WFAA.

One study from the Journal of Pediatrics found that 47 deaths in children under 2 years old happened in car seats being used outside of a car. More than half the deaths were the result of strangulation by straps that weren't correctly secured. The others were from positional asphyxia.

Today’s Parent said sleeping in the car seat is one of the top sleep mistakes new parents make with their babies. The site emphasized that experts recommend keeping the amount of time babies spend in car seats, bouncers, or a Rock ‘n Play to 30-minute stretches, to avoid developmental issues.

Other sleep mistakes parents are prone to make include sleeping with baby on the chest on the couch, installing crib bumpers, and putting too much faith in baby monitors.

The safest approach to sleeping is still one of the simplest – with baby on their back in a crib that is free of any loose blankets or sheets. Full safe sleep guidelines are available from the Centers for Disease Control and Prevention on its website.

More Like This
Gathre’s Winnie The Pooh Collection Is Finally Here
"Crybaby Ambulance" In Europe Will Help Exhausted Parents
Does Pumped Breast Milk Have Antibodies? Experts Weigh In
There's A Good Reason Why Your Baby Is So In Love With CoComelon