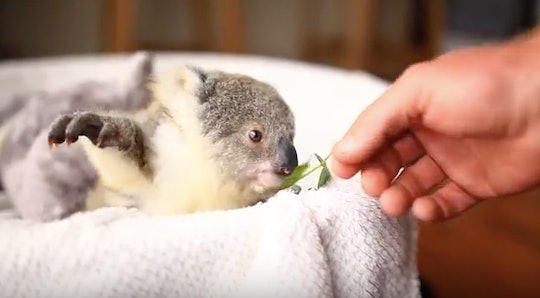 If you don't know of the koala named Imogen, arguably Symbio Wildlife Park's cutest resident, then you haven't been living your best life. Imogen is being raised by the keepers at Symbio Wildlife Park, and first made headlines when she decided to hug a National Geographic cameraman. (Classic Imogen. Classic.)

Now Imogen is nearing her first birthday and, in celebration, was the star of her own photo shoot. (Look, I've seen the hundred thousand photos you took at your kid's first birthday, so I really don't want to hear your judgment.) The pictures were taken when the adorable, cute, charming (seriously guys, insert whatever synonym for cute you deem appropriate, because they all apply) baby koala was just 10 months old. Now, because the Internet is awesome, behind-the-scenes footage of Imogen's photo shoot has been released, and it is just as delightful as you'd imagine.

Imogen will celebrate her first birthday on November 14th, but until then, here's her being all sorts of precious, because that is what this baby Koala is all about.