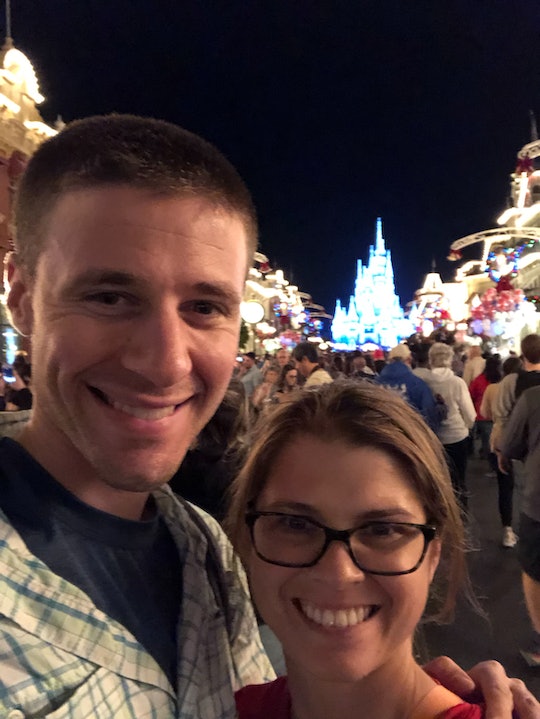 The One Time I Didn't Want To See My Period, After Trying To Get It Back

Jackie and her husband have been trying since late 2016. She suffers from hypothalamic amenorrhea, and this is the tenth installment of her Trying diary. You can read the previous entry here.

Damnit. Or a more colorful word that rhymes with "luck." That was the first thing out of my mouth at 5 a.m. in the bathroom after relieving myself. (Yes, I mutter to myself on the john like an old man.) The toilet paper felt pretty wet, but the progesterone pills have caused me to generate a fair amount of mucus. Depending on how well I “inserted” the suppositories, sometimes that mucus would be the pink color of the capsule. But this wasn’t a pink tinge. This was definitely a streak of blood. My first period in probably five years. And a sign that the IUI (intrauterine insemination) was a big, fat failure.

It was exactly two weeks after the procedure, and I had been getting all the bloating and cramping and cravings and moodiness that could either be interpreted as early pregnancy or PMS. The fact that I hadn’t experienced the latter since the first Obama administration made it kind of hard to tell what exactly was going on, but I was hopeful. Brutally realistic that it was more likely to be a failure than not, but still hopeful.

Now my hopes were broken, and I was alone.

JP sent me his morning text from the satellite tracker he was using paddling the Everglades killing off use-or-lose vacation time without me (not that I would want to go if I had the time.) “I started my trip” the automated response said. How lovely. You have no clue how my day has started.

“I got my period today,” I wrote back, not knowing when he would turn the beacon back on and get my message.

I sat on the couch, holding my coffee, numb. Logical Jackie knew what to do: call the doctor when they open, schedule a baseline ultrasound for two days from now, call the specialty pharmacy to get my fertility meds delivered, get ready for round two.

But emotional Jackie was a mess: I knew it was going to fail. Why would you expect it to work? Nothing works on the first try, and you may be too broken for it ever to work out. Just another example of Jackie falling short of high expectations.

I binge ate all day, everything I could get my hands on to the point where I felt physically sick and mentally disgusted with myself. It’s a horrible thing to do, self-flagellation with food or anything else, but its part a release — a big f-u to the world and its expectations — and part a punishment for everything I had done wrong, even if I didn’t know what that everything was.

Two weeks and two days after Bloody Monday, we’re listening to Christmas music while I’ve got a catheter hanging out of my uterus.

I muddled my way through work, and then decided to drown my sorrows at the local brewery even if I wasn’t that hungry. The beer tasted bitter and I couldn’t get more than two sips down. I was done. Done.

But I couldn’t be done. Not for JP, and not for myself. This fertility process is a marathon, and while I often want to quit in the middle of the race, and sometimes I walk and curse the last many miles, I finish what I start kicking and screaming. We’re only in mile 4 or 5.

JP texted me back later in the day a message — a little garbled with spelling because of the crude system to type on the GPS beacon: “OK. We’ll try again. Love you.”

So we try again. This time the doctor puts me on much higher doses to start, and I can feel the difference. To put it bluntly, I am part lunatic-part raging bitch 90 percent of the time. Add to it the stress of having to travel up to New York for my annual review and company holiday party (and having to finagle injecting myself in an airplane bathroom) and I’m just miserable.

Despite the higher dosages, my ovaries are still kind of pokey but I eventually develop follicles and two weeks and two days after Bloody Monday, we’re listening to Christmas music while I’ve got a catheter hanging out of my uterus. It’s amazing how we go from hope to devastation to hope again.

Christmas comes and I’m feeling extremely awful in the two-week wait — and took it out on JP really unreasonably. But as we approach the new year, I wonder what 2019 will bring. If I don’t bleed by January 4, I will take a pregnancy test and we will know for sure. I hope it brings a little one, but I wonder how much more of this roller coaster I can take.

I know JP is already thinking the costs are getting “unsustainable” but how bad does he want it? How bad do I want it? Do we bag it at a certain point and change directions or do we slog along till my body succumbs? I can’t get ahead of myself, but here’s to another year of waiting.

More Like This
The Euphoric Terror Of Rollerskating Was Exactly What I Needed
Stop Talking About Formula Feeding Like It’s Always A “Last Resort"
I Found Gender Euphoria In My Second Pregnancy
I'll Be First In Line To Vaccinate My Kids, But I'll Never Forget That We Were Last