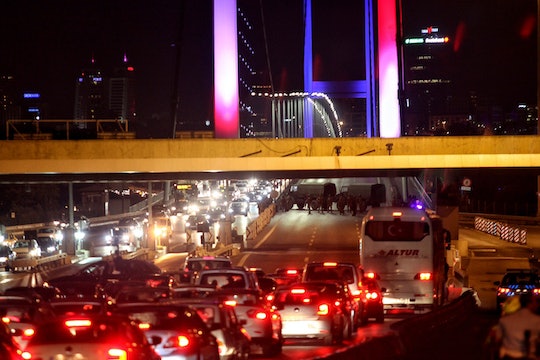 A Breakdown Of Turkey's Coup As Tensions Continue To Rise

The Turkish Military completely seized control of the country in a coup. On Friday night, bridges were shut down and all flights were suspended out of Turkey's Ataturk airport as tanks surrounded the building. As military gains control of the country and many continue to wonder what is going on, a breakdown of Turkey's coup is necessary to understand the brevity of the current situation in Turkey.

Around 10 p.m., in Turkey, the military released a statement through a Turkish news agency, saying the armed forces have "fully seized control" of the country. According to the Associated Press, the "armed forces have seized power, citing autocratic rule and increased terrorism" as their reason for taking over.

According to Reuters, Yildirim said that the elected government would remain in office and that the attempted coup by Turkey's military would be put down. If the coup is successful, it would overthrow Turkish President Tayvip Erdogan who has ruled Turkey since 2003 and if it was successful, according to Reuters would be one of the "biggest shifts in power in the Middle East in years." "We will overcome this," Erdogan told CNN through Facetime.

Gunshots Have Been Fired

According to the BBC, military helicopters have fired gunshots around the Presidential Complex in the Turkish capital of Anarka. This comes on the heels of witness reports saying that they heard explosions in Ankara. According to Reuters, tanks have opened fire around the Turkish parliament building and around the Istanbul airport.

According to Quartz, Istanbul's major bridges have been shut down, as well as access to Turkey's largest airport. Access to social media and state run media have all been cut off.

There Have Been Attempted Coups in Turkey Before

According to the Telegraph, the coups in Turkey have dated back to 1960 and as recently as 1997 — almost 20 years ago.

Erdogan Doesn't Believe The Coup Will Be Successful

According to the AP, Erdogan is in a secure location but does not believe the coup will be successful. "There is absolutely no chain of command here," Erdogan said. "Right now the chain of command has been put on hold."