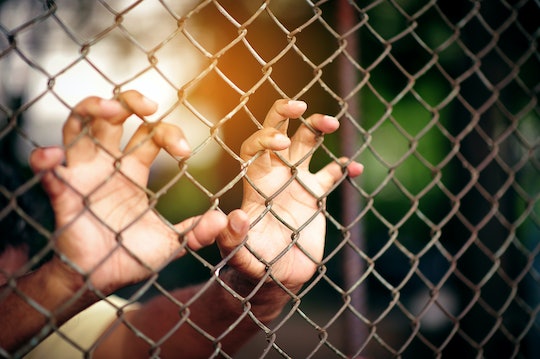 This Mom Says Officials Took Her Baby While She Was Nursing, Thanks To This Trump Policy

In May, the Trump administration introduced a new anti-immigration policy that calls for the prosecution of every undocumented immigrant entering the United States without legal documentation. As a result of the "zero-tolerance" crackdown, hundreds of children are being ripped away from their families as they tried to cross the border, immigration activists and civil rights groups say. In one case, a breastfeeding mom said officials took her baby thanks to President Donald Trump's policy, according to an exclusive CNN report.

The woman, an undocumented immigrant from Honduras, told a Texas civil rights attorney during an appearance at a federal court in McAllen, Texas, earlier this week that federal authorities removed her daughter, allegedly while she nursed her child in an immigration detention center, CNN reported late Wednesday. At the time of the incident, the migrant mother was awaiting prosecution for reportedly trying to enter the country near the Rio Grande in South Texas in the last few weeks, according to CNN. When she protested being separated from her child, she alleges that officials placed her in cuffs.

Natalia Cornelio, criminal justice program director of the Texas Civil Rights Project, had interviewed the unnamed woman at the federal courthouse about her experience, according to BuzzFeed News. Cornelio said the mother was crying as she recalled the details, telling BuzzFeed News:

When she resisted having her daughter taken from her, she said agents forcibly took her child and then placed her in handcuffs.

Cornelio said, that day, she interviewed about 30 undocumented parents awaiting prosecution, including the mother from Honduras, who all said that their kids were taken away without reason, according to BuzzFeed News. Overall, the Texas Civil Rights Project attorney has spoken to 180 immigrants who reportedly don't know what happened to their children, BuzzFeed News reported.

If that's not horrifying enough, Miguel Nogueras, an assistant federal public defender handling immigration cases, told CNN that, in an unofficial count by his office, some 500 kids have been taken from their parents since Trump introduced the "zero-tolerance" policy last month. And the explanation for why they are being separated is disturbing if true: Nogueras said that, often, officials tell detained immigrants that they're removing their children in order to have them bathed or cleaned up, never to be seen by their parents again, according to CNN.

It depends on who the agent is on that day. They'll be told, 'We're going to separate your kids so they can bathe.' And that's not true.

Nogueras continued, according to CNN:

It's really hard to look in the eye of a mother or father who would plead for you — help me get my child back.

To this point, Cornelio told CNN:

The government is essentially torturing people by doing this.

A spokesperson for U.S. Customs and Border Protection denied the accusations made against federal immigration officials in an email statement to Romper. The CBP official told Romper that the claims are "unsubstantiated" and "nothing could be further from the truth," adding:

Family separation may occur when we are unable to determine the custodial relationship, when we determine that a child may be at risk with the custodian, or when the custodian is transferred to a criminal detention setting due to criminal charges. That is longstanding policy.

From October 2016 to February 2018, federal officials have separated nearly 1,800 immigrant families at the U.S.-Mexico border, according to Huffington Post. The government typically places children torn from their families in the care of a relative or either in foster care or a detention shelter. In April, the U.S. Department of Health and Human Services revealed that it had lost track of almost 1,500 unaccompanied minors who were placed with sponsors, Huffington Post reported.

In the end, Trump's "zero-tolerance" policy is not only anti-immigration, it's also anti-family. Taking children away from their parents is cruel, and against the very family values he and his GOP cohort purport to uphold.