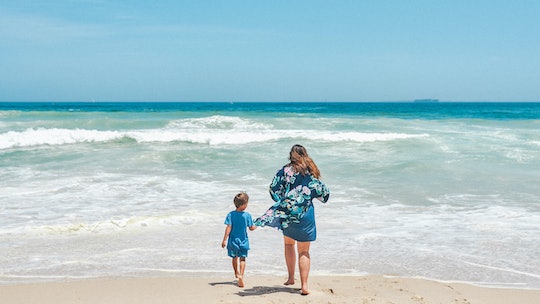 A Brief History of the "Bad Mom"

In many ways, 2016 was the year of the Bad Mom. Not only did it see the premiere of the movie Bad Moms, starring Mila Kunis, Kathryn Hahn, and Kristin Bell as the bed-hopping, booze-swilling, PTA-cutting moms in question, but it was also the year that many mothers were shamed on social media, for offenses both major and minor. In March 2016, for instance, Chrissy Teigen was mommy-shamed on social media for going out to dinner with her husband John Legend a few days after daughter Luna's birth, while a Cincinnati mom was similarly excoriated when her 3-year-old son fell into the zoo enclosure of a gorilla named Harambe, who was subsequently killed by zoo officials.

In December, Blac Chyna was the latest celebrity to don the mantle of Bad Mom after she walked out on Rob Kardashian, taking their newborn baby Dream with her. While sources reported that the couple's constant bickering was creating a toxic environment for the baby, Blac Chyna was nonetheless labeled a bad mom by social media commenters, especially after the bereft reality TV dad posted Instagram photos of his empty home and accused Chyna of being a Grinch and "stealing Christmas."

Although social media mommy-shaming is a relatively new phenomenon, the fact is that the Bad Mom has been a thing throughout history. And some of those moms did stuff way worse than let their kids, say, eat Froot Loops for dinner, as Chrissy Teigen did last year. Romper explored the history of bad moms, as well as the question: is it such a bad thing to be labeled a "bad mom" after all?

In ancient Greece, the archetypal Bad Mom was Medea, who killed her children as revenge for her husband’s two-timing, as documented in the eponymous Euripedes play. During the Roman Republic, Cornelia, mother of the powerful Gracchi brothers, was held up as the backbone of the Empire, educating herself and her sons and prodding them to political glory (perhaps even to the point of having their rivals killed).

Sure, we love successful women with successful children, but if you're too successful, watch out — you, too, can be slapped with the Bad Mom label.

Cordelia has been venerated in Roman art for centuries, but not everyone approved of her ambition at the time. Juvenal, a first century Roman satirical poet, excoriated women like her who were "too" educated, who "[beg] as soon as she sits down to dinner, to discourse on poets and poetry, comparing Virgil with Homer... there ought to be some things women don't understand." In short, the level of education that allowed Cordelia to rise to the top was the very thing later used against her. Sure, we love successful women with successful children, but if you're too successful, watch out — you, too, can be slapped with the Bad Mom label.

The Bad Mom makes an appearance in classic literature as well. Anna Karenina, that tragic heroine of Russian fiction (pictured below from a 1935 MGM adaptation of the novel, with Greta Garbo as Anna), berated herself for being an “unnatural mother” after she abandons her son and husband to be with her lover, author Ayelet Waldman points in her memoir Bad Mother: A Chronicle of Maternal Crimes, Minor Calamities, and Occasional Moments of Grace. The idea of an emotionally detached mother was so powerful that it later contributed to the development of the now-debunked theory that so-called "refrigerator mothers" caused autism, due to their cold, uncaring attitudes toward their children.

Even more disturbingly, as Joanna Scutts at Time points out, mothers who were anything other than white and middle-class have historically had the presumption of "badness" thrust upon them — even to the point of having their children taken away from them. A study authored by Northwestern University law professor Dorothy Roberts on race and class in the child welfare system, for instance, shows that children of color are three times more likely to be referred to child protective services than white children. Their parents are also more likely to be investigated for abuse.

“A young woman’s race, her poverty and her 'bad' behavior could condemn her before she had the chance to be a mother," wrote Scutts.

In the late 20th century, the stereotype of the bad mom resurfaced as Ronald Reagan’s mythical “welfare queen," who exploited the system for all she could. Most recently, GOP rhetoric has focused on immigrant moms and their so-called “anchor babies," who, according to President-elect Donald Trump, deserve to have their citizenship revoked.

"What happens is they're in Mexico, they're going to have a baby, they move over here for a couple of days, they have the baby," Trump told Bill O'Reilly in 2015.

Yet when it comes to how our culture views Bad Moms, it seems that the tide is rapidly turning. In July 2016, we hit peak Bad Mom with the release of Bad Moms, which celebrates a trio of former PTA moms (played by Mila Kunis, Kathryn Hahn, and Kristen Bell) who down shots, hit on dudes at the bar, then drop off their kids at school covered in last night's Spaghetti-Os.

Relax, says the Bad Mom. Don't have time to whip up some tasty organic treats for the bake sale? Just pick up a box of frosted cupcakes from the display case nearest to the cashiers five minutes before school starts. The kids will live on a little sugar.

In the past decade or so, the bestseller lists have featured such titles as Sh*tty Moms: A Parenting Guide for the Rest of Us, and Toddlers are A*holes. Bloggers like Dooce, Crabmommy, and People I Want to Punch in the Throat have built a cottage industry of moms who give absolutely no f*cks about whether or not their kids are watching too much TV or doing age-appropriate chores. These modern moms proudly blog about guzzling glass after glass of Yellowtail chardonnay while letting their kids watch seven consecutive episodes of Doc McStuffins.

Writer Heather Balog, who calls her blog The Bad Mommy Diaries, has decided to embrace the term. She thinks that moms are so eager to lean into the Bad Mommy label because the trope is so universal. "I'm sure we all think we're bad at this mommy thing occasionally," she told Romper. "In fact, many of us may think it more than occasionally."

Lyranda Martin-Evans has built a career out of being a self-fashioned Bad Mom. She's the author of Reasons Mommy Drinks, a collection of cocktail recipes for moms who really, really need a break. "There's been a shift in recent years on our definition of what motherhood means, thanks in part to the sharing and support on social media," Martin-Evans told Romper. "Who has the energy to be perfect at everything and then bake gluten-free brownies from scratch?"

While dads have always had permission to be beer-swilling dolts (think Homer Simpson), now women are claiming the honor — but they're doing it with Pinot Grigio and yoga pants.

Being a Bad Mom is lucrative currency in the realm of motherhood; it's a badge of honor that says Yes, I'm A Mom, But I Don't Give A F*ck. And in a world where celebrities proudly refer to themselves as "hot messes" and defiantly post no-makeup selfies, the Bad Mom label fits in nicely with the cultural climate of embracing — or even celebrating — imperfection.

In this age of hyper-aggressive "helicopter" parenting, there’s something satisfying about the desire to just throw in the towel, to just give up and say f**k it and give your kids juice instead of soy milk, or chicken nuggets instead of organic fishsticks. There's also an element of gender equality at play, too: while dads have always had permission to be beer-swilling dolts (think Homer Simpson), now women are claiming the honor — but they're doing it with Pinot Grigio and yoga pants.

The rise of the Bad Mom, however, does raise the question: do we really want to be celebrating Bad Moms when the consequences of being a real-life bad mom can be so dire?

"The issue gets murky because of the changing notions of what a neglectful parent is today...where is the line drawn in which we cross over to being an actual Bad Mom?"

"The issue gets murky because of the changing notions of what a neglectful parent is today," Tina Donvito, a blogger at Foggy Mommy, told Romper. "Real Bad Moms are child abusers. Where is the line drawn in which we cross over to being an actual Bad Mom?"

Writers like Lorraine Duffy Merkl have rejected the term altogether, calling it just another "humblebrag." "We need to call our lack of perfection something different," she wrote on the website Parent.co, "considering that there are some mothers out there who’ve actually earned, and deserve, the adjective 'bad.'"

There's also the issue of whether the stereotype of the Bad Mom in its current incarnation is inherently geared toward upper middle-class white woman. As reviewers like Scott Mendelson at Forbes have pointed out, the moms in Bad Moms don't appear to be facing any real-world financial struggles, thus glossing over the struggles of working moms confronted with issues like the gender wage gap or the astronomical costs of child care. It seems the extent to which bad moms can embrace their "imperfection" has a lot to do with how much you can afford to spend to buy perfection — or, at least, the appearance of it.

Still, all in all, the image of the Good Mom — as personified by fictional characters like June Cleaver, or Marmee March from Little Women— isn't going anywhere anytime soon. Whether you blame old TV sitcoms or Pinterest-perfect selfies, the idea of the picture-perfect mom still very much reigns supreme in our collective consciousness. (How else can you explain the fact that Hallmark still sells 139 million cards every Mother's Day?).

Parenting is hard, and in the end, there's a big difference between failing to cut your kids' sandwiches into the shape of Olaf the Snowman, and being an actual (i.e. criminally negligent) Bad Mom. So why not cut moms a break and allow them to lean into the stereotype? After all, the Bad Mom is everything they don’t want to be — and also, everything they already are.