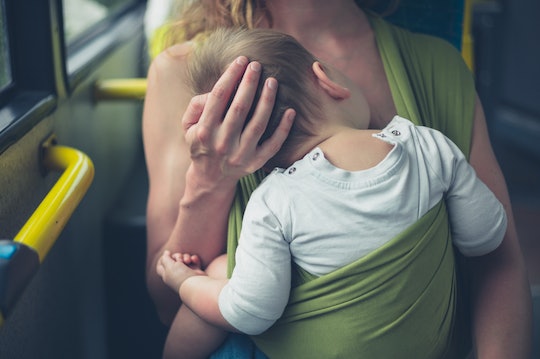 A Bus Driver Told A Breastfeeding Mom To Cover Up, & This Is Getting Really Old

When will the breastfeeding wars end? This week, for instance, a new story surfaced of a bus driver reportedly telling a breastfeeding mom to cover up while she was on a bus with her family, and these types of occurrences are getting really, really old. Here's what reportedly happened: Payton Garza, the breastfeeding mom, was on her way home from a doctor's appointment while on a San Antonio city bus with her two sons, Zavier and Christopher, as well as her husband. While on the bus, the driver allegedly stopped driving to tell Garza to cover herself with a blanket while she nursed her hungry 16-month-old son.

VIA Metropolitan Transit told Romper in an emailed statement:

While VIA does not have an official policy regarding breastfeeding on the bus, we do not prohibit or restrict it, in accordance with state law. The operator in question was a passenger on the bus at the time. The bus was not in motion when he approached the passenger and referenced VIA's code of conduct, which prohibits exposing certain parts of one’s body, including breasts. We are reviewing these guidelines to include clear language regarding breastfeeding. In the meantime, we have informed all operators not to interfere with or interrupt women who are breastfeeding.

Garza told local news station KENS 5, “I hadn’t even been sitting down for very long and he was pulling down my shirt a little bit, and I was like, okay, you’re hungry because I haven’t fed you." Totally normal, right? You don't often have a choice as to when your kids get hungry and running to and from doctor's appointments with two children, all while using pubic transportation. There's no way to plan for every moment of the day.

Even if she hadn't planned on nursing on the bus, breastfeeding in public is legal in Texas, so she wasn't doing anything wrong. But, the male bus driver apparently thought otherwise. According to Garza, he allegedly stopped the bus and walked all the way back to talk to her. According to KENS 5, Garza said:

He said to be considerate of those around me, and if I didn’t have a small little towel or blanket, if I could just cover up. And I was just like, "Oh. Okay. Thank you." And I was just nodding my head so he could go back up to the front.

Not only was the driver, should Garza's report be accurate, sexualizing the act of feeding her baby, he was also wrong, according to the law. Texas' breastfeeding law says that a woman can breastfeed wherever she is "authorized to be." However, a VIA spokesperson told KENS 5 that the driver was simply following VIA's code of conduct, which states that passengers can't urinate, defecate, or expose one's breasts, anus, or genitals.

As per their statement, VIA told Romper that it informed Garza that the driver was asked not to approach nursing mothers again and that they are reviewing the policy so that it's clearer for other drivers.

You can't blame Garza for complying in the moment — it's normal to be shocked and embarrassed when someone calls you out for publicly breastfeeding, even though there is no reason to be ashamed. When people ask mothers to go somewhere else or cover up while they're feeding their children, or don't speak up when they see a woman being shamed in a public place, that stigma is only perpetuated.

That stigma caused her to just stop nursing her son and offer him a juice box instead. According to KENS 5, Garza said that when she and her family got off the bus, the driver allegedly reminded her again to cover up "next time." She said:

And all I said was "thank you" and I walked out the back door. I felt disrespected, because I don’t see why I was approached, when thousands of other moms do this publicly anywhere.

Although she didn't make a scene on the bus, Garza is demanding an apology from the driver, since she's been so shaken by the incident that she hasn't taken a bus since. Again, VIA said that the driver had been reprimanded but is still an employee of the transportation service.

"That was very disrespectful of [him] to come up to a nursing mother, and tell me to either cover up or just stop," Garza explained to KENS 5. "That wasn’t any of his concern. I’m feeding my child. More of the way I saw it is if you don’t like it, just look away. You don’t have to see what I’m doing."

Unfortunately, all of the blame shouldn't be put on the driver, either. Many people are socialized to think that breastfeeding in public is wrong because you can see a woman's breast. And, hopefully, with better written public breastfeeding laws, policies, and education, what happened to Garza won't happen again anytime soon.