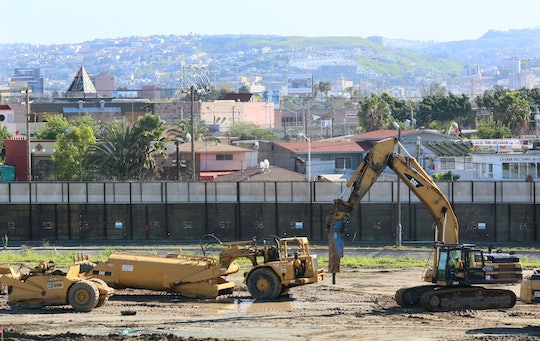 Here's A By-The-Numbers On Trump’s Wall

Ever since President Donald Trump first announced his intentions to build a border wall between Mexico and the United States, both supporters and those opposed to the structure have had plenty to say about it — and several groups have weighed in with estimates on how expensive a border wall would be and how long it would take to build. (Spoiler alert: nearly all estimates were higher than Trump's predictions.) Now, an internal report by the U.S. Department of Homeland Security has confirmed that building Trump's wall will be an expensive procedure — and it's one that will take nearly four years to finish.

During Trump's run for the presidency, Trump's campaign claimed the wall would cost approximately $12 billion, and they estimated that it would run about 1,000 miles across the border. An MIT Technology Review report, on the other hand, placed the border wall's price tag at a much higher $27 to $40 billion. Estimates made by the state director for the Structural Engineer’s Association of Texas, Raul Meza, put total construction time at a minimum of five years.

So what is Trump's administration saying about the border wall's construction? Neither the White House nor the Department of Homeland Security have confirmed the report, but here's a breakdown of the numbers seen in the report obtained by Reuters.

According to the Department of Homeland Security's internal report, the wall would take three and a half years to build. The report assumes funding would be granted by April or May, and that construction could commence in September. Considering that's past the halfway mark for 2017, it seems like — even if construction ran on time — the wall's construction could take longer than the duration of Trump's entire presidency.

Estimates are now putting the wall's cost at $21.6 billion — nearly double the amount Trump's campaign first claimed it would be, according to BuzzFeed. In the past, Trump has repeatedly said Mexico will pay for the wall at a later date, with Congress (so, American tax dollars) fronting the funds at first. Mexican President Enrique Peña Nieto has understandably replied that "Mexico will not pay for any wall."

A plan has yet to emerge on how exactly Trump plans to make Mexico pay for the wall — although there are a few theories out there on how it could happen using import taxes.

How Long The Wall Would Be

The wall would go up in three phases, using a combination of fences and walls, and it would stretch a total of 1,250 miles, according to the DHS report. Approximately 654 miles of the border are already walled in, which leaves quite a bit of construction still to be completed.

The first phase to be completed would cost $360 million and see construction go up over 26 miles of land in San Diego, California; El Paso, Texas; and the Rio Grande Valley in Texas. The second phase would stretch 151 miles, covering large swathes of Texas and Arizona. The third — and largest — phase of the project would cover 1,080 miles, although the report did not specify where construction would take place. (Judging by the vast amount of land covered, it seems safe to assume that phase three would be plugging up the rest of the border.)

Not only would the United States have to get environmental and domain waivers approved in order to proceed with the wall, it would also have to meet International Boundary and Water Commission requirements, which could bring costs from $11 million a mile to $15 million a mile in certain areas.

The Department of Homeland Security told Reuters that it does not "comment on or confirm the potential existence of pre-decisional, deliberative documents," while a White House spokeswoman said she would not comment on a report that hasn't been presented to the president yet. However, one thing is certain — Trump's wall will take plenty of time and money to create, and it might not be finished by the time 2020 rolls around.