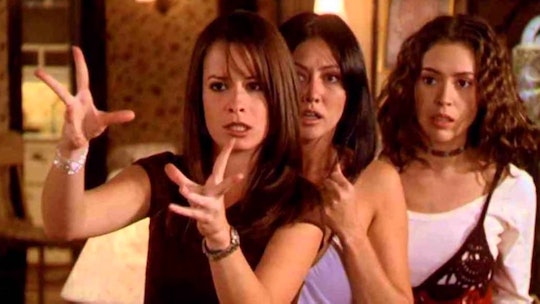 The Power Of Three Is Returning In The Best Way!

This is not a drill, fans of ~magic~! If you were a television viewer between the years of 1998 and 2006 and have any interest in the bond of sisters, magical powers, demons, OTP relationships you didn't know you rooted for until you were an Adult, or even San Francisco landscape, then do I have some good news for you. According to The Hollywood Reporter, there is a Charmed reboot in the works on the CW, and it may just be the best news since finding out TNT airs Charmed, still, like it's Y2K.

Since ending in 2006, Charmed hasn't really *gone* anywhere. In fact, fans of the show can still watch it on TV on TNT most mornings and on Netflix like, any day, anywhere, any damn time they want. They can relive the witches finding out they have powers for the first time, relive the relationships that worked out, fizzled due to death, or imploded because one person was the literal Head of the Underworld (official LinkedIn job title). But, if reruns aren't good enough for you, then the news that Jane the Virgin writers, Jessica O'Toole and Amy Rardin, created the script for the series is certainly welcome.

The Hollywood Reporter says that the new reboot, which also has showrunner Jennie Snyder Urman from Jane the Virgin involved, will be a "reimagining of the original TV series set in 1976. The reboot will be connected to the original series in some fashion, though it's not entirely clear at this point how that will come to pass."

Could it be that the reboot could circle around Piper, Prue, Phoebe, and Piper's heritage? Possibly their mom or other witches that lived in that time?

There isn't much else to go on at the moment. In a perfect world — for me — we'd just get like another eight years of The Power of Three kicking ass and vanquishing demons left and right. Since that will probably not happen, we can hope for a new set of witches that will show San Fran (or really any area of the country that has a beautiful old Victorian house) how to rein in an overpopulation of demons and evil.