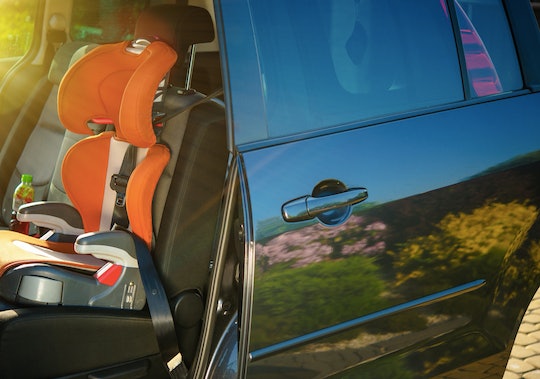 On Monday, the parents of Myles K. Hill learned the horrible news that no parent ever wants to hear, that their soon-to-be 4-year-old son had died in an accident at daycare. Hill never actually made it to the daycare facility itself, as he was left inside a van parked outside of his daycare for nearly 12 hours in 93-degree weather in Orlando, Florida. The daycare did not immediately return Romper's request for comment. According to The Washington Post, Hill became the 32nd child to die this year from heatstroke after being left in a hot car. It's this hot-car death that shows how badly we need laws to prevent these kinds of tragedies from happening.

To combat the issue of children dying of heatstroke in hot cars, Connecticut Sen. Richard Blumenthal and Minnesota Sen. Al Franken introduced the HOT CARS Act — Helping Overcome Trauma for Children Alone in the Rear Seat — into the Senate just before the late summer congressional recess. The act has been lauded by more than two dozen child and automobile safety advocacy groups, as the bill proposes to fundamentally change how cars must be made in order to ensure the safety of every single passenger — especially the littlest ones in the back seat.

The HOT CARS Act would require auto makers to include technology with rear seat sensors and alerts to let drivers know a child was still in the car, just as cars alert drivers for lights left on or seat belts left unbuckled, according to NBC News. Mandating that cars should include child rear seat alerts isn't about assigning blame to either auto makers or parents — it's about preventing the completely avoidable and accidental deaths of children in hot cars.

Another important point that this bill would seek to address is known as forgotten baby syndrome, the name that science has given to why parents can forget a baby in the car. University of South Florida psychology professor Dr. David Diamond explained to NBC News how parents can forget their kids in the car: Quite simply, the brain can only handle so much competing information at once.

Even though the idea seems so straightforward and simple and the bill has received bipartisan support, the GOP has typically been opposed to "unnecessary" government regulation, particularly within the auto industry. Critics of the bill argue that it shouldn't be up to car companies to remind parents or caregivers to ensure that a child hasn't been left inside a car. This is the second time the HOT CARS Act has been introduced into Congress; last year, it died in committee.

Unfortunately, the public can't necessarily rely on car makers themselves to take up the initiative to include rear seat reminder technology on their own. There are car companies that do offer rear seat reminders, including GM and Nissan — but there are even more car companies that don't yet offer this feature. And even some car seat companies have alarms to remind parents that baby is in the back seat, too — but a recent study found that many car seat alarms are unreliable, as something as common as spilled juice in the car seat could cause such an alarm to malfunction.

It shouldn't take 32 child heatstroke deaths for Congress to act — truth be told, it shouldn't even take a single death. According to watchdog group KidsAndCars.org, the 38 children die every year from vehicular heat stroke — and the year's not over yet, which means every parent should contact their senator and urge them to co-sponsor and support the HOT CARS Act.