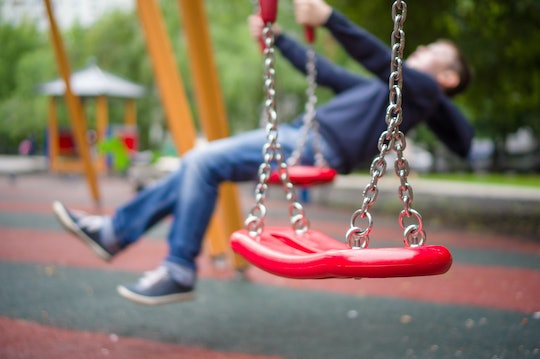 Learning to navigate the terrain of childhood friendships can be a difficult task for kids, and watching them struggle can be painful for parents. Children aren't great at noticing subtlety, and that means they might miss cues that would allow them to understand when to push on, and when to step away. Because, let's face it, some kids don't mesh and that's OK, and some kids are tiny little jerks, and you don't want your kid to feel the need to battle that all day. Seeing a child rejected by friends is painful, but how to tell your kid a friend "just isn't that into them," is a crucial step in managing the process.

I spoke to a large group of my mom and dad friends, and initially, we were all instantly angry on behalf of our children in this hypothetical scenario. Choruses of "Tell your kid, 'screw that jerk, you don't want to be friends with them anyway,'" shouted out. It's easy to get your back up as a parent when you notice that someone might not adore your kid as much as you do. But with reflection came subtlety. Not everyone is going to mesh, and it's not always because one party is in the wrong. Personalities are funny things, and some people are better off as acquaintances rather than BFFs.

I was a gregarious kid. I was outgoing and would talk to anyone at the park. I sincerely believed that every stranger was just a friend I hadn't gotten to know yet. It would be a long and painful process for me to understand that I was a lot to take, and that some kids wouldn't understand my excitable ways. It was no fault of theirs or mine, but let me tell you, it stung. Each rejection on the playground or in the classroom felt like a personal failure, even if most kids liked me well enough. After witnessing my umpteenth brush-off and ensuing sadness, my MawMaw took me to the library and picked up a copy of Judy Moody. She explained to me that Judy had some really great friends, but not everyone was so keen on Judy. That was OK, because the friends Judy had were a tight posse, and worth more than 10 more friends who didn't understand how awesome she is.

That was a crucial moment in my childhood. While it still hurt when kids didn't want to be my friend, I had a sturdy foundation to rely on when it got tough.

As it turns out, many of my parent friends would respond similarly.

Amy Cissell, mom and author, tells Romper, "Depending on why, I'd probably say something like 'no matter how awesome two people are individually, sometimes they aren't awesome together. That person might be great, and you definitely are fantastic, but not everyone wants to or needs to be friends with everyone else. That's just a part of how life is sometimes, and yeah it can hurt, but it doesn't mean either of you are lacking at all.'" Unless, of course, the kid was a jerk, and then she falls back on, "You don't need that kid as a friend, anyway."

Rebekah Borucki, mother of five and author of the upcoming book Managing The Motherload (Hay House 2019), reminds Romper that it can be pretty simple. "Usually, I just remind them of all the jerks and non-jerks we just don't like or wouldn't call friends, that it's OK for us to not like everyone, just like we don't like all flavors of ice cream. I tell them I know that it hurts, but we can't have standards for other people that we don't have for ourselves. So unless we're going to like everybody, we can't expect everybody to like us."

How to tell your kid that a friend "just isn't that into them," doesn't need to be a huge deal, and if we make it a bigger deal than it is, we're just prolonging the inevitable. Not everyone is going to be besties, and some people aren't great to begin with. It's truly one or the other, and letting kids learn that is important to their growth as a human being.