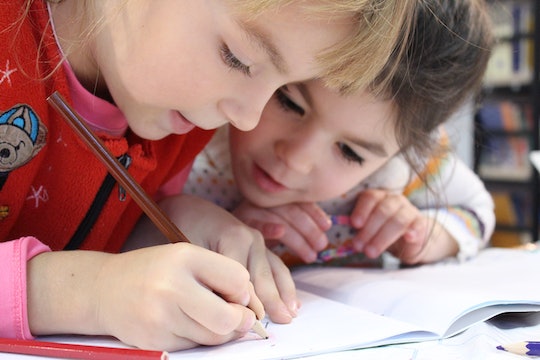 A Child’s Best Friend Can Influence Their Fears

It's no secret that our friends can have a major influence on our lives — both good and bad — and those influences can affect every aspect of our lives. New research says that impact might actually begin much earlier than we realize: during our formative years. A child's best friend can influence what they're afraid of, and how they perceive danger, which can determine a lot about how they do so as adults, according to a new study.

Fears and even phobias are common in children: everything from being afraid of the dark and needing to sleep with a nightlight, to fearing clowns, or having anxiety about being separated from parents. Dealing with a chid's fears is an experience many parents are already familiar with. Children can often be anxious about unknowns, or new situations, like starting school or having a sleepover at a friend's house. What we're afraid of, as kids and as adults, is due to a combination of genetic and environmental factors. Most of us have at least one fear that we're aware of (such as heights), and many of those fears may have started in childhood, even if we don't remember a specific event that caused them.

Psychologists in England were curious about whether a child's friends might have an impact on their anxieties. Research about the early relationships of children have helped psychologists, parents, and teachers understand just how important those early friendships are for kids. Until recently, it hadn't really been thought of as an important developmental influence, but that perspective is beginning to change.

Researchers at the University of East Anglia wanted to understand how friends influence a child's fears and fear responses. They observed pairs of children who had established friendships and wanted to know if the friends shared the same fears, and if they reacted with the same behaviors.

The results of their study suggested that fears might be transmitted between close friends, as well as the reactions to that fear. The study suggests that sometimes friends might intentionally or unintentionally be "egging on" fears, especially in group settings (think of telling scary stories at a sleepover or summer camp). Kids between the ages of 7 and 10 are most likely to take social cues from their friends, and their initial fear reaction might be less about feeling real fear as it is trying to fit in with the crowd.

One especially interesting finding might challenge a pervasive gender stereotype: in their study, researchers found that boys were more likely to be afraid after discussing a scary subject than girls. But researchers point out that boys might suppress their initial anxiety or unease out of embarrassment, only letting it show when other friends do. In fact, the researchers suggested that these close friendships that create space to explore fears and anxiety might even be more important for boys than girls (who are not as likely to pretend they aren't scared).

The implications of this study might at first sound negative: that a child's friends might have the potential to create fears and anxiety. But researchers are actually hoping that they can turn these results around and develop ways to utilize close friendships as a means to help promote good coping skills. Since a child's responses and behaviors to fearful stimuli were also influenced by their friends, researchers hope that they can help teachers, parents, and other adults that routinely interact with children find ways to make those dynamics supportive rather than enabling — a solution that wouldn't just benefit friends as kids, but throughout the rest of their lives.