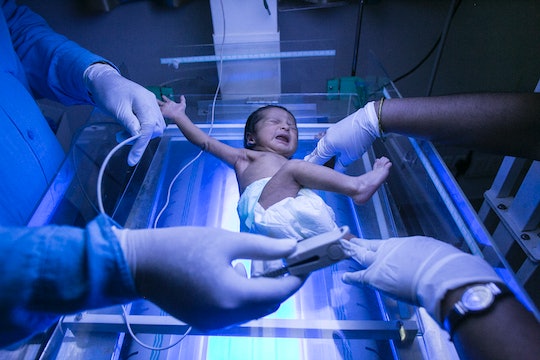 A new study from The American Journal of Epidemiology revealed that there may be a link between the month a child is born and the development of learning disabilities throughout childhood. The study, done in the UK, found that the month a child is born could raise their autism risk, as well as their risk for learning disabilities such as dyslexia.

The study, done by the University of Cambridge, looked at more 800,000 children in Scotland. Researchers found that, of children born between October and December, 8.9 percent had autism or another learning disability. Children who were born in the previous quarter (July through September) had a rate of 7.6 percent.

This isn't the first study of its kind, and is actually part of a much larger investigation into how birth month could play into many diseases and conditions outside of just autism. A study from the Journal of the American Medical Informatics Association, which was completed last year, discovered connections between birth month and more than 50 diseases. Another study, done in 2011, again looked at the possible connection between birth month and autism. The study found that conception during the winter season (January through March) gave children a 6 percent increased risk of developing autism, compared to children conceived during the summer.

There are a few theories amongst researchers that have attempted to figure out why being born at a certain time of the year might make it more likely a child would develop any condition, but specifically autism.

One theory is that children born in the winter months in many parts of the world are also born during the time of year with the least amount of sunlight. Humans need sunlight to help get the benefits of Vitamin D, which we use to metabolize vital nutrients in our diets: calcium and phosphate. Some researchers have suggested that supplemental Vitamin D can improve outcomes in autistic children, which isn't surprisingly, since scientists know the nutrients play an important role in brain development. That study, however, was just one isolated case study and more research is needed to see if there are broader implications for any child with autism.

It's also possible that seasonal variations in a woman's diet and exercise during her pregnancy, as well as being exposed to various contagious diseases that spread more rapidly during the winter months (such as influenza), might contribute to the development of a weaker immune system in her baby.

According to researchers at Columbia University, who have conducted similar studies, babies born in May seem to have the lowest disease risk, while those born in October to November have the highest.