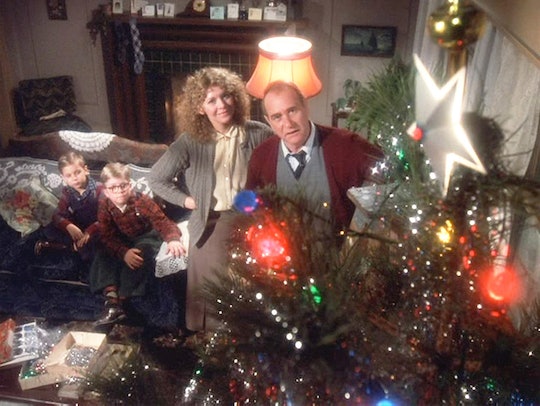 'A Christmas Story' Is A Beloved Holiday Classic, & It's Not Allowed In My House

This post is only the opinion of the author and does not represent the opinions of BDG, its staff, or the company as a whole.

"Fra-jeeel-ay. Must be Italian." If you're like me, you can quote entire scenes from A Christmas Story and just thinking the words conjures up the corresponding images in your mind. For many of us, watching the tale of Ralphie and his family is as much a part of the holiday as giving gifts or fighting with Uncle Steve after he's had too much to drink. It is such a ubiquitous part of Christmas that to this day, TBS and TNT devote a full 24 hours to playing the film.

A Christmas Story is one of America's most beloved holiday movies, easily maintaining popularity in the 35 years since its release in 1983. The movie has spawned countless fanclubs, inspired a broadway musical, and has its own active fanfiction archive (and let's not forget all the merchandise available for purchase). You can even tour and stay at the Parker house in Cleveland, Ohio, if you so choose.

If you ask someone why it's so popular, what makes it different from other Christmas movies, they likely won't be able to explain it — only that there is a notion about it that is wholly unique to the essence of the film. Something about A Christmas Story makes it feel nostalgic and special to so many Americans, and its spark is not easily quantifiable. Throughout my entire childhood, and well into my adult years, A Christmas Story was my favorite holiday movie, and I adored every pink bunny-furred minute of it. But not anymore. I no longer watch it, and I don't let my kids watch it either.

Let me tell you a little about my background. I am exactly what you'd expect if you heard someone say "Oh, she's from Ohio." I'm a corn-fed white girl who spent summers at bible camp and knew how to make a cheesy tuna casserole before I knew how to do geometry. (Although, I am still really sketchy on the math, if I'm being honest.) Being the religious girl that I was, after a short courtship, I moved to New York City to marry the man of my dreams, a Chinese cop from Brooklyn.

During one of our first Christmases together, I was shocked to discover that my husband had never seen my beloved Christmas Story. Growing up the son of immigrants who did not partake in much American television, and who did not celebrate Christmas, it wasn't something he was exposed to. I vividly recall being incredibly excited to settle in at my aunt's house and watch it with him on Christmas day.

As the film began, I was flush with happiness as I heard the voice of the iconic narrator, Jean Shepherd.

We both laughed at the kid who stuck his tongue to the flagpole, and shook our heads at the hideous leg lamp Ralphie's dad won as a "very important award." Together, we roared with laughter as we watched the neighbors' poorly behaved bloodhounds barge in and steal the Parkers' Christmas turkey. It was wonderful until the next scene began to play, and I started feeling a little ill.

You undoubtedly know the scene that I'm writing about before I even mention it. After the bloodhounds plow into the Parkers' small, 1940s era linoleum and chrome kitchen devouring the turkey like a hunted deer, Old Man Parker declares that the family is going out to dinner. Lo and behold, the only place that's open on Christmas Day in their small town is the local Chinese restaurant. It is a restaurant very similar to the one my husband's grandparents owned in Brooklyn. The tables of the restaurant are bedecked with pristine white tablecloths and the walls are covered in red and gold tapestries. The waitstaff are sharply attired in silk mandarin collared suits, smiling broadly at the Parkers, the only customers in the establishment.

As we watched, I remember sitting beside him, looking around at my middle class white family as they all sang along with the overly stereotyped, mocking scene featuring three Chinese men as they are guided in song by their chef attempting to sing "Deck The Halls," as the Parkers laugh behind their hands at their attempts.

My husband brushed it off. He didn't laugh, but he didn't say anything either. He sat there, in a room full of people who purportedly love him as they sang "Fa ra ra ra ra" and laughed. He never once brought it up that night, and all the while, I felt like garbage. I was ashamed of myself, my family, and our collective ability to completely detach ourselves from how horribly racist that scene is. It should not have taken my marrying a Chinese man to be able to understand how inherently awful that portrayal of Chinese Americans was.

So much of that is the crux of racism and whiteness in general. It is the case that most of us refuse to acknowledge its particular evils until we have a personal connection with the implications of said racism. Therefore it continues unabated, sometimes for 24 hours straight, across two cable channels on Christmas. We blithely accept this otherization as entertainment because it has always been such, and we pass these biases along to our children as we always have done. It needs to end. We need to stop waxing nostalgic about periods in our history that seemed simpler only because white people refused to accede to the idea that there was any culture or race of people that were as valuable or important as they were.

When Mrs. Parker and Ralphie laugh hysterically at the presentation of the Peking duck to the table, Old Man Parker stumblingly requests that the chef remove the head of the duck. Hilarity ensues. The joke is clear, "Oh those crazy Chinese folks, keeping the head on the duck for the table." There is a level of cultural discomfort and hysterical fear that accompanies the sound of their laughter. The startled gasp as the chef uses his cleaver to rid the duck of the offending appendage is striking given that just a few scenes before, Old Man Parker was wielding his own knife to carve a bit of turkey, swinging it like some European knight challenging the meat to a duel.

I knew that once my husband and I had children, they would not be allowed to watch A Christmas Story. It is not because I can keep them from all of the problematic portrayals of people of color, or even because I want to. Eventually, unfortunately, they will learn that this is the sad reality of representation. No, I keep them from it because of how insidious this film has become. We have reified Ralphie and his family to the point where all of the film's many problematic tropes — not just the fa ra ra ra ra — have become invisible, unimportant. The harsh racism is secondary to the nostalgic joy the movie imparts on the viewers.

The first time I brought it up to my family, asking them not to turn it on while my husband and kids were there, I was told that I was being too "politically correct." A family member told me that my husband and kids needed to "let it go, and laugh at themselves," after all, the movie was not intended to be racist, just funny. Therein lies the problem. The movie was not designed for Chinese people to be able to "laugh at themselves." It was designed for the enjoyment of white audiences for white people to laugh at Chinese people. The waitstaff of the restaurant are the butt of the joke, not the Parkers who are so culturally ignorant that they do not understand that the presentation of the duck in the manner it was served can be traced back to the thirteenth century, according to Beijing history.

I do not let my children watch A Christmas Story because we can do better. Because studies have shown that even microaggressions like negative filmic depictions of culture can have lasting implications for the children who experience it, as Smithsonian.com reported. It is our burden to stop the onward train of this tacit acceptance of racism in the name of nostalgia. Whether your children are white or Chinese or any other race, they will watch this movie and witness the zealotry that surrounds it. They will in turn internalize its contents in some form or fashion. How that internalization manifests will inevitably manifest differently in different children. For me, it meant that I developed a blind spot regarding the awful parodies of Chinese Americans. For a child of color, it will likely have a much sadder outcome. But we don't have to buy it. We don't have to support it. So while A Christmas Story may be a beloved classic, it's not allowed in my house.