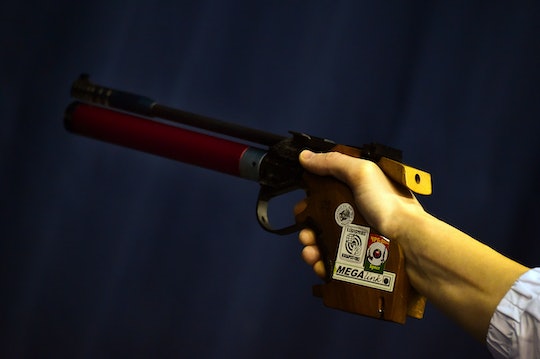 This month, a Colorado middle school brought guns to class for the third year in a row in order to teach students to use firearms, according to Colorado Springs news station KOAA. Working with pro-gun group Project Appleseed and the National Rifle Association (NRA), Craver Middle School hosts a three-day program for students that teaches them a trifecta of gun safety, how to shoot a gun, and American history, complete with a trip to the gun range. The reaction from the public has been decidedly mixed. Private gun ownership is legal and common in the United States, but should students really be learning how to use them?

"I think that it's better for them to have a respect for it [and] know how to handle it," Jim Heath, the program coordinator for Project Appleseed who worked with the students, told KOAA. "Not that they should [handle a gun], but that they are aware about the firearm. It's not, 'Oh, what's this? What can we do with this?'"

Romper reached out to Craver for comment on the program but did not immediately hear back. A music teacher at the middle school, Timothy Baird, told another local news station, KRDO, that he supported the program, saying, "Often firearms and schools don't mix. There's a big fear there. So we are pushing the safety aspect and hopefully ease some people’s fears. Personally I think it's a great step forward."

In light of incidents like these, should children be taught how to handle firearms safely? Personally, I think it's more proof that, as John Donohue argued on CNN, guns should be banned nationwide in the United States. But President Obama's own quest to increase gun safety across the United States has proven to be an uphill battle against the powerful NRA, and pulling guns from the public doesn't seem to be happening anytime soon.

So, if guns are a reality in the United States — whether you are for or against firearms — how can we keep children safe? A proposed bill in Utah has called for training to teach students what to do if they encounter a gun or gunman, according to The Salt Lake Tribune. Republican state Sen. Todd Weiler told the newspaper, "Unfortunately, it is probably a necessary reality in the society we live in these days."

The bill wouldn't teach students to use guns, as the Project Appleseed program does, but would instead teach them to contact an adult if they find a gun. It would also teach them how to react in an active shooter situation.

It's not a pleasant thing to think about: kids and firearms should not even belong in the same sentence together. However, with an increasing number of mass shootings in the country, parents have to ask themselves how they can protect their children against gun violence. Campaigning to ban guns would be my top pick, but teaching children about the dangers of guns and how to react when encountering one would be a close second. Teaching kids how to use guns, though, and letting the NRA into middle schools? I'd have to draw the line there.