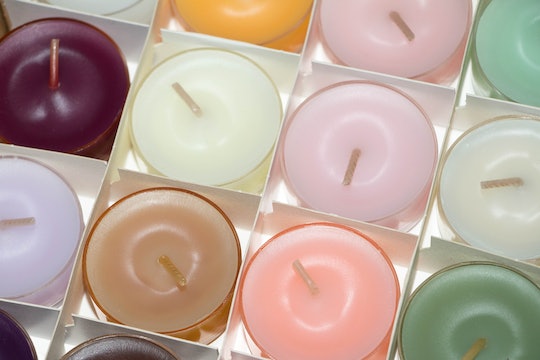 Crisis Pregnancy Centers have a reputation to often lead women looking for reproductive services into one direction. One center in particular appears to have gone even farther, using manipulation of scent as a tactic. According to a Facebook post, a Crisis Pregnancy Center lights baby powder candles in order to seemingly remind its visitors of the smell of newborns.

Romper has reached out to Stanton Healthcare Belfast, the crisis pregnancy center in question, for comment regarding its Facebook post from July recommending centers to use Yankee Candle baby powder scented candles and is awaiting a response.

While Yankee Candle has not yet responded to Romper's request for comment on the center's use of the candles, the company did tell with Broadly: "Yankee Candle is not affiliated with Stanton Healthcare Belfast. We are currently addressing the issue."

The original image features a burning, pink Yankee Candle in its baby powder scent. Posted on July 21, many users are just now finding out about it, and are trying to voice their upset. They've found particular fault with Stanton Healthcare Belfast's caption, which reads:

As it exists currently, the comments section shows all users thanking Stanton Healthcare for their services. The site Buzz.ie, however, claims that negative responses to the photo have all been deleted by Stanton. Screenshots show that users have accused the center of "brainwashing," calling the organization "manipulative" and "insensitive" to women seeking out their services, according to Buzz.ie.

The British Pregnancy Advisory Service, a not-for-profit charity, tweeted out the story, noting that "a scented candle won't convince a woman to have a child." A spokesperson for the charity, Katherine O'Brien, told Broadly:

Not only is this a rather cruel attempt to manipulate women who may be in incredibly desperate circumstances, it is also profoundly patronizing. The majority of women who have an abortion are already mothers — they know perfectly well how a newborn baby smells, and the idea that any woman could be convinced to have a child by the mere presence of a scented candle is just insulting.

Stanton Healthcare Belfast is an overseas location of a "life-affirming medical clinic [based] in Idaho," according to the company's website. Visitors attend "one-on-one session[s]," where "a trained Pregnancy Adviser assesses client needs by asking simple questions. The adviser then provides relevant, accurate information and encourages the client to make healthy choice." "Knowledge is power," they boast, claiming that they're working to "empower women to make informed decisions."

Medical, spiritual, or personal advice notwithstanding, using baby-related scents as a means to influence women's parenthood planning is not knowledge-based in the slightest and is undoubtedly a problematic practice.