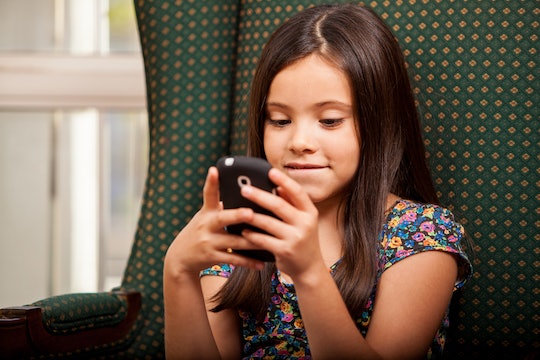 In the "Why Didn't I Think Of That?" category, a dad who got tired of texting his kid only to receive nothing in response has invented an app that requires your kid to text you back. And parents with kids who are preteens, tweens, and teenagers will likely never want to go back to life as it was before.

As People reported, a dad in the UK named Nick Herbert bought his kid a smart phone and found out — like all parents before him — that many (if not most) young people don't seem to know how to reply promptly to their mom and dad's check-ins.

Hmm. Odd how they are so tech-smart, but seem to find that little "reply" arrow in the text box super difficult, don't you think?

"What I thought was a solution turned into a different problem," Herbert wrote on the app's website, after realizing that giving his son Ben a little freedom with his very own digital device turned into a huge complication for poor old dad.

Herbert, a 45-year-old London resident according to the UK's Daily Mail, would try to locate and confirm exactly where Ben, 13, was and what he was doing, to little avail, the newspaper noted.

"Because the phone was 'smart,' he could play games and watch videos on it," Herbert wrote on the app's website, per People. "So invariably he keeps his phone on silent so I wouldn’t know."

"... When I try and contact him, he rarely answers, either because he doesn’t hear the phone or because (and I’ve finally had to admit this to myself) he may be embarrassed to speak to his dad in front of his friends,” he added on the app's website, People reported.

Been there, done that.

Only, Herbert turned frustration into a fix.

His new app, ReplyASAP, takes over the phone's screen and sets off an alarm, which basically ensures that teens respond to the folks back home, Good Housekeeping explained.

ReplyASAP not only gives you your kid's location, but the recipient can't do anything on their phone until they interact with the message from the sender, added People, pretty much shutting down the whole device until E.T. — uh, I mean your kid – phones home.

"During the development process I spoke to Ben and showed him the designs and thinking behind the app and he likes the idea because he will know that if he gets one of these messages then he will always hear it and will know its important," Herbert wrote on the app's website. "He will also have the ability to send me these messages — so there is a mutual understanding that using ReplyASAP is only for important things and not because he needs new batteries for his xbox controller."

Good Housekeeping added that there are similar applications out there, such as the iOS purchase Ignore No More; "Emergency Bypass" on iPhone also helps you establish a bit more control over a child's device by establishing a sound every time a specific caller gets in touch.

In addition, Good Housekeeping noted that a timestamp can be set up on devices showing when a text was read on the other end.

But ReplyASAP's idea seems to be simple and timely for parents who just needs things to work easily. It is currently available for Android in the United States; Herbert plans to release the iOS version soon.

I worry a bunch about technology and my kids; how much is too much? What rules about texting and social media are important enough for me to fight for and what things can I let go of as they earn a little more independence?

And while I applaud Herbert's fix, no matter how many inventions and devices are ever created, parents and kids will always have to work on their communication and establish an atmosphere of trust. If they do, everything will work out just fine anyway.