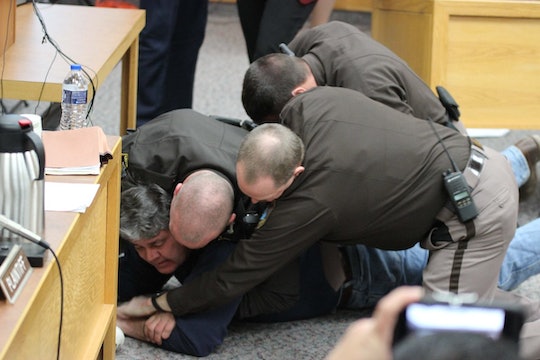 As A Parent, I Understand. As A Victim, I Know This Isn't The Way.

I had a visceral reaction when I watched the father of three girls sexually abused by Larry Nassar lunge at the former USA Gymnastics doctor in court. Randall Margraves had listened to two of his daughters, Lauren and Madison Margraves, give their impact statements in court on Friday, and was overcome with rage, or grief, or both. "I want that son of a b****!" he yelled as security wrestled him down. "Give me one minute with that bastard."

When Margraves asked the judge for five minutes, and then one minute, alone with Nassar in a room, I ached at the pain this man was clearly carrying. And when his request was denied, and he ran towards Nassar with rage in his eyes, I silently wished: I hope he makes it.

As a parent, I understand. Any parent understands. But as a victim of sexual assault, I know Margraves' reaction isn't the way.

I know that acting out his pain will not help his daughters, or other victims. I know, from experience, that the idea that a father can avenge his daughter is a fantasy; he cannot time travel. I also know that witnessing his overwhelming anguish, and possibly his sense of aching guilt, push him to retaliate can increase the burden felt by victims, and actually make it more difficult for sexual assault survivors to come forward and share stories of their own.

Only 15.8 to 35 percent of all sexual assaults are reported to the police, according to the U.S. Bureau of Justice Statistics. Shame and embarrassment are among the many reasons why victims choose not to come forward, and that shame and embarrassment can include the almost intuitive need for a victim to protect family members from the same feelings. The common feelings of guilt and self-blame that follow an assault can be amplified when a victim watches her loved ones impacted by the knowledge that an assault took place. Not wanting a family member to know about abuse is one of the reasons why victims choose not to come forward and report the assault they've endured, according to the Maryland Coalition Against Sexual Assault (MCASA).

Make no mistake, the guilt for the parents of these gymnasts is grievous. Many were present in the room for the numerous assaults their daughters endured. Margraves' three daughters were abused by Nassar — his injury is real. They are his children. But their pain is not his. As Rachel Denhollander, one of the first gymnasts to speak out against Nassar, wrote in the New York Times, the burden should not be on these parents, but on the wider society:

In many ways, the sexual assault scandal that was 30 years in the making was only a symptom of a much deeper cultural problem — the unwillingness to speak the truth against one’s own community.

We can acknowledge the pain of both the parent and the child, but we must prioritize the healing of the victims. Adding to their burden is unfair. As parents, we must find strength for them, or risk alienating them and other victims.

What would I do, or say, if the person who caused my baby reprehensible trauma? In no uncertain terms, if I'm being honest, I would need to call my nearest and dearest friends, so they could help me bury a body.

As a victim of sexual assault, I can tell you that worrying about how my then-boyfriend, my mother, and my brother would react to the news that a coworker raped me during a work retreat, is why I initially declined to press charges. A mere 30 minutes after I was assaulted, while the bruises on my breasts, thighs, and wrists started to form, I thought of those I loved. If staying quiet could keep them from feeling a small percentage of what I felt in that moment, then staying quiet is exactly what I wanted to do.

And therein lies the problem: is this father feeling a pain many of us cannot imagine? Of course. It is obvious. It is palpable. It is a pain that ignites the fundamental urge to protect our children in all of us parents. As I watched this father run towards the man who abused his daughters, I couldn't help but think of my own child. What would I do if it was my baby who had been assaulted? What would I do, or say, if the person who caused my baby reprehensible trauma was sitting in front of me? In no uncertain terms, if I'm being honest, I would need to call my nearest and dearest friends, so they could help me bury a body.

But this father's pain, and his choice to act on it, doesn't negate the pain of his daughters: the victims. We must have a better understanding of what the victims feel and what they need, which is not for their parents to dream up dramatic retributions. We cannot, as parents, react in a way that encourages victims to internalize their trauma, and carry the burden of healing all on their own. Parents cannot take ownership of their children's pain, because the end result is one in which children don't want to admit to feeling pain, and don't want to speak about the pain others have caused, in order to protect their parents.

Victims are well aware that their trauma will infect their families, and their friends, and their loved ones.

One of Margraves' daughters said, in court during her impact statement, "I really feel that my entire family has gone through hell and back these last few months, because of what Larry Nassar did to both my sisters and I years ago." Victims are well aware that their trauma will infect their families, and their friends, and their loved ones. And while Margraves was speaking to the judge, and asking for time with his daughter's abuser, alone, one of his daughters can be seen saying, "Dad, stop. Stop. Dad, stop." Perhaps not only a plea for her father to stop asking for a form of vengeance we all know is impossible for any court in this country to allow, but for her father to stop hurting in a way that could make her feel responsible. A way that reminds her that she isn't the only one in pain. A way that could, in the way insidious sexual violence and abuse only can, make her feel guilty.

I understood why my then-boyfriend reacted with so much anger and rage when he found out I was raped, but my understanding didn't keep me from feeling guilty. I know why my brother would talk about grand, unrealistic plans to travel to where I lived and "take care of the guy" himself, but that knowledge couldn't stop me from feeling as though I was selfish for making my problem, his problem. I know why my mother cried, and why she sometimes still cries, six years later, and those tears only leave me questioning my decision to come forward at all.

When Margraves was being handcuffed by court police, an officer told him, "We understand." As a parent, it's easy to not only sympathize with this distraught father, but hope that his wish for vengeance comes to fruition. It's much more difficult, however, for us to understand the pain of the victims. To dive into the complicated ways in which survivors of sexual assault react to such trauma. But if we are to end systemic violence against women, we must consider how our reactions to it could end up silencing those who are hurt most by it.

More Like This
When Does A Baby Recognize Their Father? A Pediatrician Explains
What To Do If Your Toddler Keeps Taking Off Their Diaper At Night
Reddit Backs Mom Who Got Scolded By Teacher For Not Inviting 30 Kids To Birthday Party
Why You Should Go Ahead And Have That Fourth Baby
What Parents Are Talking About — Delivered Straight To Your Inbox