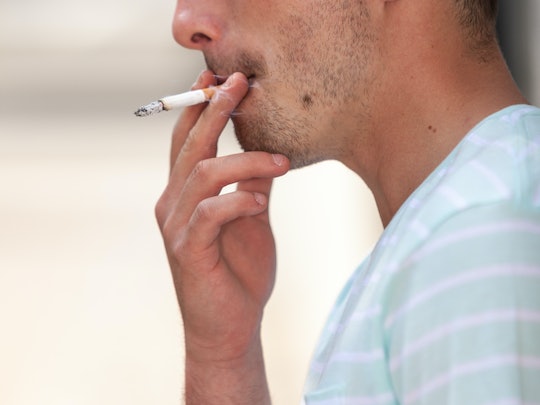 A Dad's Nicotine Exposure Might Have Long-Reaching Implications For Kids

When it comes to studies discussing the impacts certain actions may have on kids, a lot of attention gets directed at mothers. This means not as much time is being devoted to understanding the impact of a father's actions on future generations. If you want to talk about substance exposure, leaving out fathers obviously means missing a chunk of data. In fact, a new study has found that a dad's nicotine exposure might have long-reaching implications on future generations, too.

Moms have been warned not to smoke while pregnant for ages, because it can cause a variety of complications. As outlined by the Centers for Disease Control and Prevention, smoking while pregnant can increase chances of miscarriages, cause problems with the placenta, and is a risk factor of Sudden Infant Death Syndrome (SIDS).

The effects of tobacco exposure and nicotine extend past a child being directly introduced to them, though. For example, many parents think smoking out of children's sight is fine, since they're not directly around the smoke. However, tobacco can cling to clothing, skin, furniture, and more, making the leftover smoke residue just as dangerous for kids.

If the harmful effects of nicotine expand farther out than originally thought, it's time for researchers to dive into the impact that fathers can have on their children.

At Florida State University College of Medicine, researchers worked with mice to produce a new study published in PLOS Biology examining the potential effects a father's smoking might have on kids. The study's abstract noted that "more men smoke cigarettes than women" and, "yet, the impact of nicotine use by men upon their descendants has not been as widely scrutinized."

Their new research suggests that men's nicotine exposure could potentially result in cognitive deficits in both children and grandchildren, according to Eurek!Alert.

The study found changes in the father's sperm, that were attributed to nicotine exposure, led to problems in the genes that play a role in memory and learning, according to the study's abstract.

Pradeep Bhide, the Jim and Betty Ann Rodgers Eminent Scholar Chair of Developmental Neuroscience at the College of Medicine, said, according to Eurek!Alert:

"Our data raise the possibility that some of the cognitive disabilities found in today's generation of children and adults may be attributable to adverse environmental insults suffered a generation or two ago. Cigarette smoking was more common and more readily accepted by the population in the 1940s, '50s, and '60s compared to today. Could that exposure be revealing itself as a marked rise in the diagnoses of neurodevelopmental disorders such as ADHD and autism?"

In the past, nicotine exposure in women has been linked to ADHD. According to Science Daily, this link can be established even if it was only the child's grandmother who smoked cigarettes in the past.

"Doctors may not warn men that their smoking could be harming their unborn child even if the mother never smoked," Bhide said, according to Eurek!Alert. "I believe our study brings this to the fore."

Further studies are needed to know if the same outcome with mice would be seen in humans. But, for now, this study poses a lot of interesting questions about how nicotine exposure is discussed.