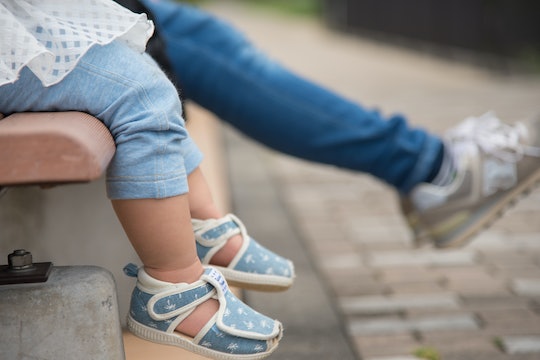 A North Carolina day care recently fired two employees for reportedly taping a 17-month-old's shoes to her feet, reported CafeMom. Upon discovering the damage, the toddler's mom was very disturbed, so she shared the upsetting story on Facebook. The mom's Facebook posts have sparked public discussions about not only what happened to the 17-month-old, but also about day care in general.

Here's how everything went down, according to Jessica Hayes' since-deleted Facebook posts. Last week, when Hayes went to pick up her daughter at Pleasant Hill Baptist Church Daycare in Elkin, North Carolina, she alleges she found her daughter's shoes taped on with masking tape. In the photos Hayes shared on Facebook, the tape was wound so tightly that it left a noticeable dent and discoloration on her daughter's ankle and foot once it was removed. "Does anyone see an issue with this? And am I the only one?" Hayes wrote alongside a few photos of her daughter's feet. Neither Hayes nor Pleasant Hill Baptist Church Daycare responded to Romper's requests for comment, however Maehsell Marley, director of the day care, provided a comment to local news outlet WXII 12:

Pleasant Hill Day Care in no way condones or allows any practice that would be harmful to a child," Marley told the outlet. "We have an outstanding group of caregivers who strive to meet the highest of expectations on a daily basis for the children in our care, and what occurred in the shoe-taping incident is not a representation of who we are.

"Absolutely ridiculous!!!!" one person commented on the photos. "What daycare is she attending?? I would be one pissed off mama!!" another commented. "I work in childcare and this is nowhere near okay! Report this, and do not let it go!! This sickens me!!!" added another.

In a followup Facebook on Saturday, Hayes explained why she was upset. She noted that her child is still learning to take her shoes off, and that she was unable to speak up for herself at only 17 months old. She wrote:

I am upset that this happened to my child as someone was clearly upset that she was learning take her shoes off and done it out of being aggravated. This was also not just her shoes being taped up it was around her ankle. To the sports players who tape their shoes they are older have the say so in doing so and is able to say it is to tight and bothering them. My 17 month old child was unable to say anything.

Hayes wrote that her daughter was crying from the discomfort the tape caused. "This was left on long enough and tight enough to leave marks, cause swelling, and bruise," she wrote on Facebook. After reviewing the footage of the incident with the day care's director, the two employees responsible for the tape were fired, according to WXII 12. Hayes wrote on Facebook:

I appropriately reacted and went straight to the director who was just as speechless as I was. I then went to take the tape off and my daughter was crying as this was obviously uncomfortable to her. I proceeded to call and speak with the director to inform this has left marks on my child. Pleasant Hill Daycare as well took appropriate action and dismissed the two employees involved ... I have personally spoken with the director and viewed the footage together we both feel the appropriate action was taken.

Hayes also wrote that she will continue to send her daughter to the day care program, since the two employees have been dismissed. And even though Hayes received hundreds of supportive comments for taking the route of action that she did, she also received some backlash for publicizing the incident. She posted a third and final post about the incident on Tuesday, and in the comments section of that post, some people suggested she "toughen up." Additionally, Hayes wrote on Facebook that some critics even created a Facebook group chat to "bad mouth" Hayes and her child, suggesting they should be removed from the day care. She concluded her final post by writing:

My child and I have never felt so unwelcome by “Christian people” and this will be the reason my child gets removed once opportunity arrises. And to those of you who have supported me through this, I have great respect and much appreciation!

That being said, Hayes explained that she has chosen to stay at the day care not only because the two employees were dismissed, but also because she is a single mother who depends on day care. "My daughter will CONTINUE to go to Pleasant Hill Daycare as I am a single parent with not much family to help me with my child," she wrote on Facebook. "I am a single mother who cannot simply take my child out and throw her in another daycare at a snap of a finger. There are waiting list and not many around."

Other single parents can definitely relate to Hayes' statements. The average annual price for day care in the United States is $11,666 in the United States, according to Child Care Aware of America. Not only that, but as Hayes mentioned, finding a new day care for your child — especially while working a full-time job — is not as simple as it may seem.

This is not the first time a day care has been under fire for allegedly inappropriate behavior towards a toddler. Earlier this year, two moms claimed their Pasco, Washington, day care waxed their toddlers' eyebrows.

If these stories have you feeling worried about choosing a day care for your child, here are suggestions of 35 questions to ask potential day cares.