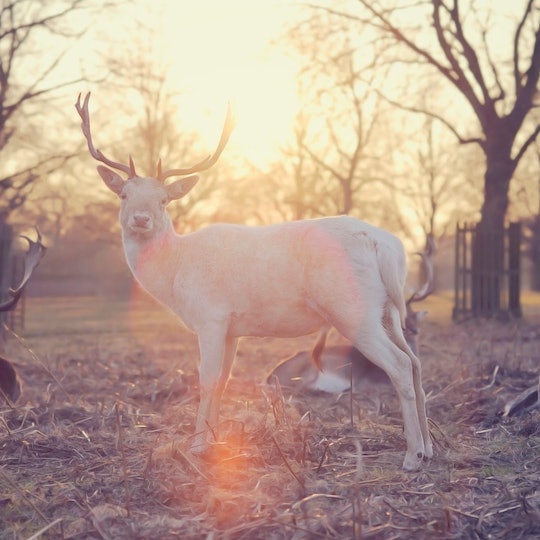 A Deer Photobombed A Newborn Photo Shoot, So BRB, We're Looking Into Whether Or Not Life Is An Actual Fairy Tale — PHOTOS

When my son was six days old, we brought a friend who’s a photographer over so we could capture that special time in his life. It's not that he would never be more beautiful, or more interesting, or otherwise more worth capturing on camera, but dammit, this would likely be the only time when he would ever truly be pose-able. For this reason (and I assume other, more sentimental reasons), newborn photography (click it; you won't regret it) is a pretty big thing these days, often utilizing spectacular props, clothing and backgrounds. Parents, and the aggressively awesome photographers they hire, will go to great lengths for the perfect shot. But I don’t think any parent plans for the kind of unexpected whimsy that happened at one of photographer Megan Rion's newborn photo shoot.

Knowing the Internet, there are roughly half a million parents who are now kicking themselves for not creating a setup similar to this. Also knowing the Internet, Rion has likely been inundated with newborn photography requests from all over the world, but only if they can go to this exact location, and perhaps put out some food near the baby to attract this deer again. Or maybe there’s a coyote nearby that might come sniff the baby, if you place some raw meat just behind those hay bales? Whatever it takes to get the shot.

Sorry. Cynicism aside, this is all pretty cute. Here are some of those deliriously sweet photos.

Pardon me, I’m just going to wring out my uterus for a minute before I actually get pregnant again from the cuteness overload in these photos. (Can you get pregnant from cuteness? I'm drunk off these photos; I don't remember anything.)

Speaking of me being drunk, these photos are really fun if you pretend that deer is Bambi.

And in case you weren't thoroughly convinced that the natural world is actually magic, here's a little more evidence:

Hmm. OK, so maybe we do live in a fairy tale, after all? I’m going to go outside and wait for the Fox and the Hound now. I’ll have my phone ready to record the footage.