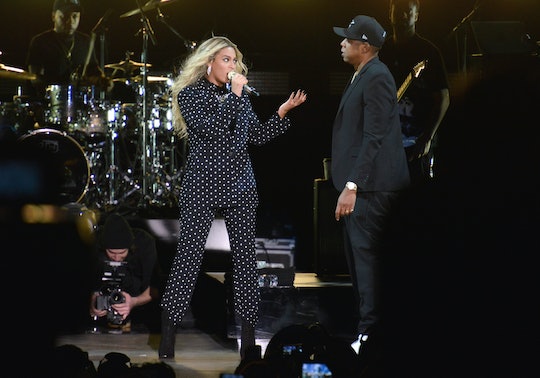 Beyoncé and JAY-Z are generally pretty dang perfect when they perform. So whenever something does go wrong in one of their concerts, it's fairly notable — particularly when it's something as uncool as this. Late Saturday night, videos emerged of a fan rushing the stage at Beyoncé and JAY-Z's concert in Georgia. The Carters were undoubtedly unhappy about the incident, but everything seems to be fine now. Here's everything known about what happened.

Saturday night, Bey and Jay performed their On The Run II tour at Mercedes-Benz Stadium in Atlanta, Georgia, E! News reported. The incident, which occurred at the very end of the concert, was filmed and shared on Twitter and Instagram by numerous audience members. In the videos, Beyoncé and JAY-Z are seen walking upstage hand-in-hand as they sing the final notes of "Apes—t," the last song of the night. Just as they make it all the way upstage, according to Fox News, an allegedly "intoxicated" man in a white T-shirt ran up the short staircase leading to the stage and ran in the Carters' direction, as seen in various videos.

After the backup dancers onstage registered what was going on, a few of them chased after the man. Several security guards also stormed the stage, and the dancers and guards were able to stop the man before he could get to the Carters, E! News reported. In the first video below, the dancers and guards are seen taming the man.

After everything was settled, the tour released a statement, clarifying that Beyoncé and JAY-Z were both OK, that they are not planning to press charges against the man, and that they will be performing their concert for the second time in Atlanta on Sunday night as planned. CNN published the statement, which reads:

At the end of last night's show, we had an intoxicated male enter the stage. At this point, we had a controlled evacuation of all crew on the stage in order to safely defuse the situation. We are happy to confirm that nobody was hurt during the incident, and Mr. & Mrs. Carter are choosing not to press charges against the individual. We would like to thank the hard work of our tour security who effectively restrained the individual and all of our dancers and team who handled the situation so professionally. Mr. & Mrs. Carter look forward to seeing you all tomorrow in Atlanta.

Yvette Noel-Schure, Beyoncé's longtime publicist, also issued a statement about the incident. "Beyoncé and JAY-Z on stage tonight in Atlanta. Thank you to all the fans for your concern," she wrote on Instagram late Saturday night, alongside a photo of the couple performing. "They are fine and looking forward to the show tomorrow."

Many fans took to Twitter to praise the couple's backup dancers for seriously coming to the rescue. "@beyonce give your dancers a raise. They was knucking and bucking and ready to fight!" one fan tweeted.

"Yo, Beyoncé’s dancers are RIDE OR DIE. Somebody jumped on the stage and the male dancers stomped him the f—k out," another wrote.

Another fan compared the dancers to trained assassins. "Thank you god that Beyoncé dancers are trained assassins who sprung into action because I dunno what in God’s name jay-z would have done to protect my sister," the fan tweeted.

And one more fan pointed out how fighting against Beyoncé's dancers, who are incredibly strong and flexible, is a bad idea. "Who want to try Beyoncé’s dancers in a fight?" the fan tweeted. "They have mad flexibility and a wild amount of endurance. You’re asking for a well choreographed FADE."

It's clear that the On The Run II dancers love Beyoncé and JAY-Z just as much as the couple's fans do. Bravo to them for springing into action, and it's such a relief that no one was hurt.