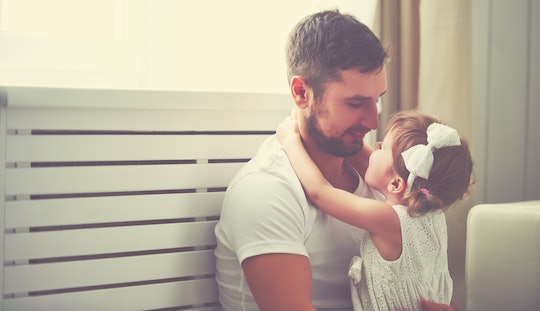 The importance of taking care of one's mental health is a topic that unfortunately isn't talked about enough. While there are many factors that affect someone's mental health, depressive illnesses are known to sometimes run in families. In fact, as a new comprehensive study has found, adding to research pertaining to a mother's mental health, a father's depression may also affect their kids' likelihood of depression later in life.

The researchers analyzed data from two programs — the UK Millennium Cohort Study and Growing Up in Ireland — that "have followed children since the early 2000s," involving more than "6,000 Irish two-parent families and nearly 8,000 UK two-parent families," as Reuters reported.

One of the authors of the study, Dr. Gemma Lewis of University College London, said that this new study is important in shattering stigmas and false facts about depression and parenting, according to the UCL's website, explaining:

There’s a common misconception that mothers are more responsible for their children’s mental health, while fathers are less influential – we found that the link between parent and teen depression is not related to gender.

While some might assume that this study's findings suggest that children are affected via genetics, in actuality, "it didn’t matter whether the paternal caregiver was biologically related to the child," according to Reuters. Rather, a father's depression appears to affect children in an environmental way.

Depression in men is fairly common — according to The Guardian, "Suicide is the biggest killer of men between 20 and 49, eclipsing road accidents, cancer and coronary heart disease. It is also predominantly a male disorder. Of the 5,981 suicides in 2012, an astonishing 4,590 (76%) were men."

And in the United States, data from 2010 gathered by the Centers for Disease Control and Prevention found that suicide was the second-biggest killer of white men, between the ages of 15 to 34. What's more, according to the CDC, out of the 121 suicides that happen each day in America, 93 of them are men.

These figures are especially concerning since many men don't seek the help they need. In fact, a 2014 article in The Guardian further explored the social stigmas and causes behind these troubling statistics. A 35-year-old man named Ant Meads told the publication of his own depression, and how society's expectations of him prevented him from seeking proper care. "It's this horrible idea of what a man is supposed to be," he told The Guardian. "It's a general feeling, evident in the fact that so many men commit suicide, because they're not living up to this mythical idea."

According to Reuters' report of the study, "Depression risk increases around age 13, and about three-fourths of adults say their mental health problems began during their teen years." So for kids who have a mother or father struggling with depression, their chances of developing the disorder appear to be far greater.

Speaking to Reuters, Lewis, the study's author, explained that one way to combat this issue is for fathers to be just as involved as mothers in their children's mental health and well-being, explaining:

The priority should be the treatment of depression in both parents, irrespective of their gender. Fathers should also be involved in any family-based interventions to improve the prevention of teenage depression.

Additionally, Lewis told the BBC that dads really need to be more self-aware and seek out help if they need it. "If you're a father who hasn't sought treatment for your depression, it could have an impact on your child," she told the outlet.

This is important advice, considering that a 2016 survey of 2,500 people in the United Kingdom, "28% of men admitted that they had not sought medical help, compared with 19% of women," according to The Guardian. While those numbers refer to men in the United Kingdom, the fact remains that the stigma surrounding men's mental health is hugely unfair.

As this study shows, depression can, in some way be environmentally passed down. Additionally, children spend a lot of time around their parents, which means that depressive behavior — such as loss of appetite or trouble concentrating — can be observed starting at a young age. The researchers noted that future studies are needed to look at "additional genetic and environmental factors that influence why fathers’ depression may increase the risk in their kids," according to Reuters. But, until then, it's just as important for a father with depression to seek help as it is for a mother, that much is clear.

If you or someone you know is struggling with depression or suicidal thoughts, contact the National Suicide Prevention Hotline at 1-800-273-8255.