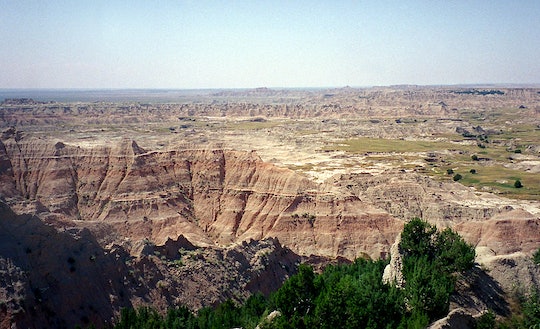 Some superheroes fight danger with fists. Others fight with science. On Tuesday, someone behind the Badlands National Park Twitter account fell into the latter category, defying the Trump administration's order for the Environmental Protection Agency to adhere to a "temporary media blackout." And the anonymous hero rebelled in the best way possible — by tweeting out scientific facts about climate change. Although the tweets were quickly deleted, screenshots of them blew up on social media, drawing attention to the questionable EPA gag order and to President Donald Trump's scary position on climate change. (Reminder: he has said that he thinks it's a hoax invented by the Chinese). So now that the Badlands National Park account has the world's attention, here are a few things it should tweet about next.

As long as we're talking about science, many Americans could certainly use some instructions for how to scientifically construct a real-world version of Leslie Knope, Amy Poehler's fearless crusader from Parks and Recreation, so that we can elect her to be our leader in 2020. After all, once Trump is done with his plans for opening up our national parks to more drilling, we're going to need a champion to ensure their continued safety for the future. Plus, Leslie makes the best scrapbooks, plans the best birthdays, and does the best dances, and we could really use some cheering up right about now.

Secondly, many ardent Badlands followers would love some way to contact the anonymous tweeter, to send thank-you notes and offers of employment. The National Parks Service released a statement in response to all the hullabaloo saying that the climate change tweets were sent by a former employee who still had access to the account but was no longer authorized to use it. Who knows what he or she is doing right now, but it seems like a national parks job may not be on the table any time soon, at least not under the Trump administration. Still, plenty of people on Twitter would be happy to hire the hidden hero, if only they could get in touch with him/her.

But honestly, the most bad-ass thing the Badlands account could tweet out is just more climate change science, every chance possible, at all hours of the day, so that it becomes very, very difficult to ignore.

Who knew that national parks would end up leading the fight against those hoping to hide the science that affects us all? Still, perhaps we shouldn't be too shocked. After all, national parks exist partially to bring unexpected beauty into our imperfect world, and that's certainly what the Badlands tweeter did today.