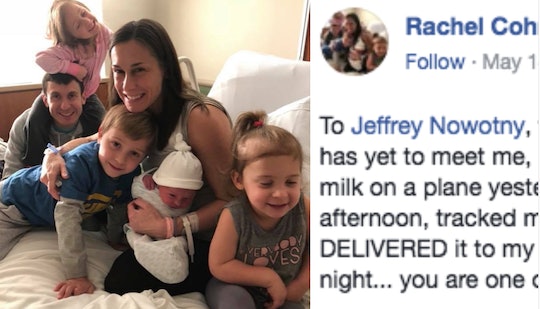 A Flight Attendant Tracked Down A Mom Who Lost Her Breast Milk, & It's Seriously Touching

If you Google "airlines" and "breast milk," you'll be treated to a ton of frustrating articles about the supposed mistreatment of breastfeeding parents. From the mom who claimed she was charged $150 to bring her breast milk aboard a plane, to the mother who shared a humiliating anecdote about attempting to get through security with her breast pump in tow, it's understandable why parents are so wary of airlines these days. Amid all the negative press about airlines and breastfeeding parents, however, a story emerged on Wednesday about a flight attendant who saved a mother's breast milk supply after she forgot it on the plane. Not only did the flight attendant keep the breast milk on ice while it was in transit, but he also hand-delivered it back to its rightful owner. Heroes do exist, people.

Rachel Braverman, a mom of four who lives in New Jersey, recently enjoyed a trip to Disney World with her husband and three eldest children. Braverman's youngest, 4-month-old Brent, stayed at home, which meant that she had to pump about 100 ounces of breast milk every few days during the trip to have a nice supply of milk ready for the infant upon her return, according to the Daily Mail. Obviously, it goes without saying that pumping during a busy family vacation is no joke, and Braverman put a lot of work into procuring a decent supply of breast milk for baby Brent. So, it's totally understandable that Braverman was devastated upon her return home on Sunday to realize that she accidentally left the liquid gold behind on the plane. Sounds like a nightmare scenario, right? Per Braverman, the answer is a resounding yes. “I literally started crying,” Braverman told TODAY.

Luckily for Braverman, her day was saved when one of the flight attendants on the following flight, Jeffrey Nowotny, discovered the missing breast milk. Nowotny, knowing how precious breast milk is, tracked down Braverman and texted her to let her know that the breast milk was safe — and on ice. Making matters even more magical is that Nowotny offered to drop the breast milk off at Braverman's home after his flight returned to Newark, New Jersey, from Miami, Florida, according to the Daily Mail.

“It said, ‘Hi, my name is Jeff, I’m a flight attendant on United and I think I have something that belongs to you, please call or text me,’" Braverman said about the miracle text, according to People. “I called him and he was like, ‘Oh my god, I have your breast milk, don’t worry, I’ve had it on ice all afternoon,’ which was the last thing I had on my mind, whether it was on ice or not. I could not even believe someone even found it.”

As for why Nowotny felt compelled to hand-deliver to Braverman's home, his explanation is heartwarming. “I have brothers and sisters and lots of little nieces and nephews, and I would like to think someone would do that for my family,” Nowotny told Braverman in a follow-up text, according to TODAY. “I can relate to the hustle and bustle of traveling with children and how challenging it can be.”

Braverman, who was touched by Nowotny's amazing act of kindness, gave him a sweet shoutout on Facebook in thanks. The message reads:

To Jeffrey Nowotny, the United flight attendant who has yet to meet me, but found my bag full of breast milk on the plane yesterday, kept it on ice all afternoon, tracked me down, and HAND DELIVERED to my house after midnight last night... you are one of a kind! That is above and beyond customer service, that is just an act of kindness. Thank you for my Mother’s Day miracle. And thank you from this happy milky face!?? #unitedairlines.

What a fantastic Mother's Day present. It's no surprise Braverman's story has since gone viral following the initial post on Sunday. And, as one might expect, people are quite moved by Nowotny's thoughtful gesture.

"Wow, for him to recognize how precious the milk was and how hard it must be to lose it is amazing and a higher level of compassion," one stunned person penned, according to Facebook.

"There are still people out there that “get it”... that’s the kind of customer service attitude that should be championed, but is mostly long forgotten these days," another commenter added.

Another person chimed in: "Amazing! Nice to know there’s still such kindness in this world."

Props to Nowotny aside, I think the main takeaway here is that a little understanding goes a long way. Although it's clear a lot of work needs to be done to repair the goodwill between parents and airlines, it seems like empathy is a great place to start.